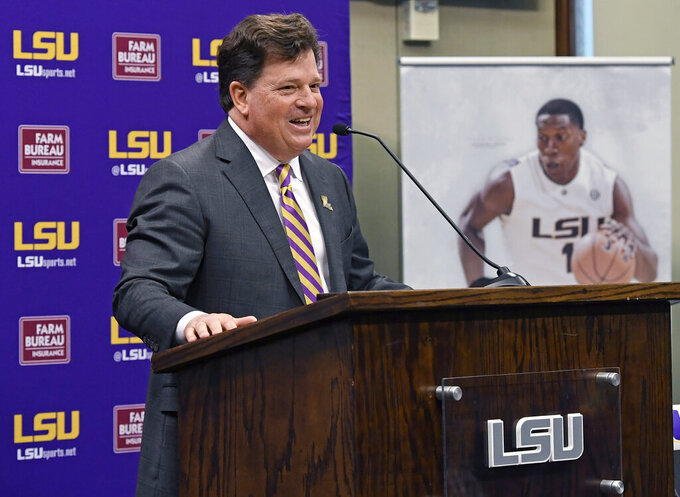 Scott Woodward answers questions after being introduced as the new Director of Athletics at LSU, Tuesday April 23, 2019, in Baton Rouge, La. Woodward, who graduated from LSU in 1985, was the Vice-Chancellor of External Affairs at his alma mater under former Chancellor Mark Emmert from 2000-2004. Woodward spent time at Washington and Texas A&M before accepting the job at LSU as a replacement for Joe Alleva. (Bill Feig/The Advocate via AP)

BATON ROUGE, La. (AP) — LSU coach Will Wade will forfeit $250,000 in incentive bonuses and new athletic director Scott Woodward will receive a six-year, $8 million pay package under contracts recommended for approval by the university's board of supervisors.

Wade is paid about $2.5 million annually and his contract includes a $50,000 bonus for winning the Southeastern Conference regular season title, and $100,000 bonuses each for qualifying for the NCAA Tournament and advancing to the round of 16. However, Wade was suspended for LSU's regular season finale and the entire postseason after a leaked transcript of an FBI wiretap quoted Wade discussing recruitment offers in a way that raised questions about whether he violated NCAA rules.

Wade has since been reinstated after denying wrongdoing and has agreed to contract amendments that not only forfeit the bonuses but allow LSU to fire him for cause and without penalty if he is found to have committed substantial recruiting violations.

Meanwhile, Woodward's contract calls for an initial salary of $1.1 million that gradually escalates to $1.5 million. The contract also includes a $250,000 relocation bonus, a $250,000 bonus for remaining on the job for five years and a $500,000 bonus for completing the six-year term. In addition, Woodward gets an automatic two-year extension if any LSU teams are found to have committed NCAA compliance violations before he took over.

Woodward agreed last week to leave his post as Texas A&M and take over at LSU, his alma mater, following Joe Alleva's resignation as A.D. and reassignment to another post within the university.

The board usually accepts such recommendations and could do so when it meets on Friday.