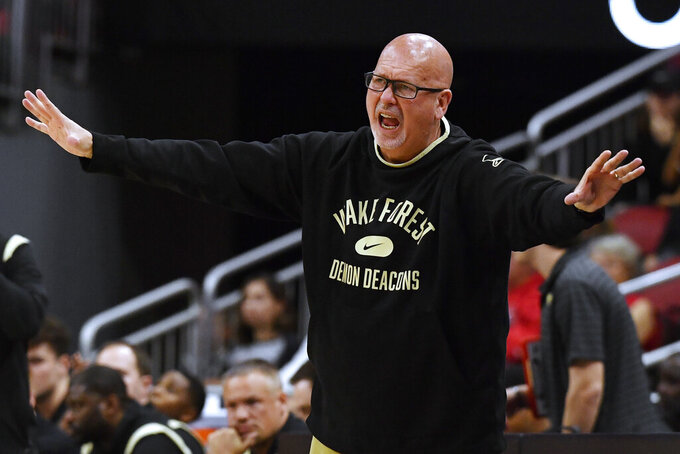 FILE - Wake Forest coach Steve Forbes shouts to the team during the second half of an NCAA college basketball game against Louisville in Louisville, Ky., Dec. 29, 2021. Forbes quickly built success for a long-struggling program. The test now is sustaining that in a time of transfers and roster turnover. (AP Photo/Timothy D. Easley, File)

Wake Forest coach Steve Forbes quickly built success for a long-struggling program. The test now is sustaining that in a time of transfers and roster turnover.

Forbes led his second team to a 25-win season and nearly secured only the program's second NCAA Tournament bid since 2010. But that success leaned heavily on a pair of transfers — one who unexpectedly blossomed into the Atlantic Coast Conference player of the year — who have departed.

“Growing up, we can be brutally honest right here: Wake Forest weren't that good when I was growing up watching them,” guard Daivien Williamson said. “We're trying to bring that tradition back to Wake Forest. I think we did last year winning 25 games, and we're just trying to grow and carry that momentum into the coming season.”

There was plenty to feel good about in Year 2 for Forbes, so much so that he was named The Associated Press league coach of the year. That team was picked to finish 13th in the 15-team ACC, but won 13 regular-season ACC games to finish fifth while also posting the Demon Deacons' first 20-win seasons since 2010.

Along the way, Alondes Williams was the league's top player after finishing second in scoring (18.5) and first in assists (5.2) after transferring from Oklahoma. Indiana State transfer Jake LaRavia developed into a first-round NBA draft pick.

“There’s a little element of a little bit of luck involved in it,” Forbes said of the transfer success. “I'm not going to sit here and tell you that I’m the portal whisperer.”

Now he faces the challenge of turning another wave of newcomers into players capable of making an impact in the ACC.

Williamson, himself a transfer who played at East Tennessee State under Forbes, is the top returning scorer (11.8) and the lone returning starter. The newcomers include transfers Tyree Appleby (Florida), and Jao Ituka (Marist) in the backcourt, and 6-foot-10 forward Andrew Carr (Delaware) and 7-footer Davion Bradford (Kansas State) up front.

If one or two become another transfer gem, the Demon Deacons could surprise again.

Wake Forest this time has been picked to finish ninth in an ACC that is still pursuing a post-expansion goal of becoming a 10-bid league. The Demon Deacons have hit 20 wins in consecutive seasons just twice since the Tim Duncan era in the late 1990s, including four straight seasons from 2002-05.

Appleby spent his first two college seasons at Cleveland State before spending the past two years at Florida. He has averaged double figures in all four seasons and is a career 1,500-point scorer.

“I think just because Alondes and Jake left, i think a lot of people think we don’t have players to fill those shoes this year,” Appleby said. “But I think they’re going to be shocked.”

The Demon Deacons have three undersized guards capable of putting up numbers, with Appleby, Ituka and Williamson all listed at 6-1. Ituka was the top scorer of the three last season after averaging 15.3 points at Marist, while the three players combined to shoot 37% from behind the arc.

Damari Monsanto was expected to miss last season due to surgery for an Achilles injury, but he recovered in time to play 17 games and average 7.3 points. That included shooting 39.5% from 3-point range. The former Southern Conference freshman of the year at ETSU could thrive with a full offseason of recovery and last season's experience.

Wake Forest ultimately fell on the wrong side of the NCAA bubble after an unexpected one-and-done showing in the ACC Tournament. It didn't help that the team had the 343rd-ranked nonconference strength of schedule as of Selection Sunday.

Forbes said the team has sought to improve its schedule strength for this year, with matchups ahead against Georgia (Southeastern Conference), LSU (SEC) and Rutgers (Big Ten) along with Wisconsin in the ACC/Big Ten Challenge.

“We have to win the right games to take the next step, because obviously the next step is to go to the tournament,” Forbes said. “But that’s something that we expect to do every year. These guys know that, and so that’s the plan.”