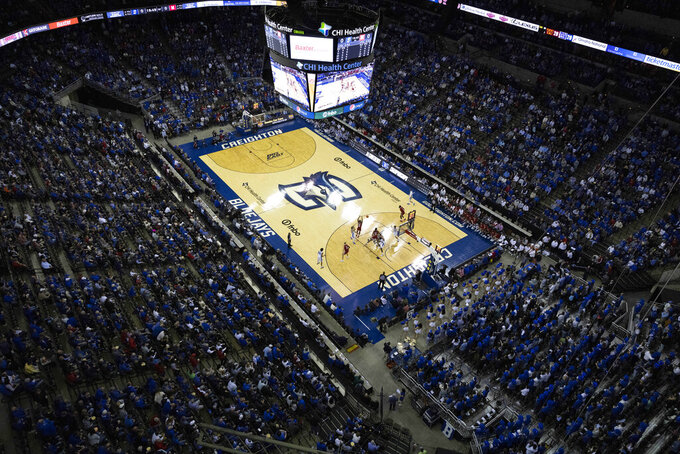 Nebraska plays against Creighton during the first half of an NCAA college basketball game on Sunday, Dec. 4, 2022, in Omaha, Neb. (AP Photo/Rebecca S. Gratz)

Days like Sunday were what he envisioned when he decided to play his final season for the Huskers after spending the previous four years at North Dakota State.

When the final buzzer sounded on a 63-53 upset of the No. 7 Bluejays, Griesel celebrated Nebraska's first win in 14 regular-season games in Omaha since 1995 with a long embrace of his parents. It was Nebraska's second win in 11 meetings with Creighton overall.

“When I committed here, this was the game that I wanted the most, obviously, for a lot of reasons,” Griesel said. “Just thinking back to players that I idolized that wore this jersey, that didn’t get this win, and especially in this arena. ... I get a little bit emotional thinking about it just because it means so much to me and so much to this group and to the state. This is a day that I’ll remember for the rest of my life.”

Derrick Walker scored a career-high 22 points and Griesel had 13 of his 18 in the second half to lead the Huskers (6-3).

“To be able to get a signature win like this is huge," said Nebraska coach Fred Hoiberg, whose team is playing with more confidence so far this season after going 24-67 his first three years.

Creighton (6-3) lost its third straight, with its previous two against ranked opponents.

“It's different being the hunted,” Bluejays coach Greg McDermott said. “This team hasn't totally adjusted to that. You play four ‘buy’ games, you play four ranked teams. This is the first one where we played a good basketball team that everybody expected us to beat. It takes maturity to prepare for that. You can dissect this 100 different ways but the bottom line is Nebraska was better today.”

The Huskers, picked to finish last in the Big Ten, wanted to slow down the Bluejays’ “Let It Fly” offense, and they did better than they could have imagined against the Big East preseason favorites. It also didn’t hurt that Creighton’s cold shooting from its loss at second-ranked Texas on Thursday carried over.

Walker, playing his fourth game since missing the first five with what Hoiberg described as a health issue, gave the Huskers their biggest lead, 57-45, on a dunk with 2:22 left.

Walker was 11 of 16 from the field and time after time imposed his will in the post against Creighton's 7-foot-1 Ryan Kalkbrenner. The Huskers held a 46-16 scoring advantage in the paint.

Francisco Farabello scored 16 points to lead the Bluejays, going 5 for 9 on 3-pointers. Baylor Scheierman and Kalkbrenner had 10 points apiece.

“We've been making a lot of strides as a team,” Walker said, “and getting this win for us. It meant so much for the program and it means so much for the people around us. We’re going to celebrate this moment, but we can’t wait to just keep improving and getting better and showing the world what we’re made of.”

Nebraska: The Huskers have won three straight and have elevated their game since Walker re-entered the lineup.

Creighton: The Bluejays are in an offensive funk. The 3-pointer is a huge part of its offense, and they are just 14 of 67 (21%) over their last two games.

“We’ve had a rough week shooting the basketball,” McDermott said. “I can’t put my finger on why.”

Creighton came into the game with its highest ranking in program history. The Bluejays should stay in the Top 25 in Monday's poll, but a big drop is likely.

Nebraska: The Huskers opened a stretch of three games against top-10 opponents. They open Big Ten play at No. 10 Indiana on Wednesday and host No. 5 Purdue on Saturday.

Creighton: The Bluejays head to Las Vegas for two games in the Jack Jones Hoopfest, against BYU on Saturday and against Arizona State on Monday, Dec. 12.