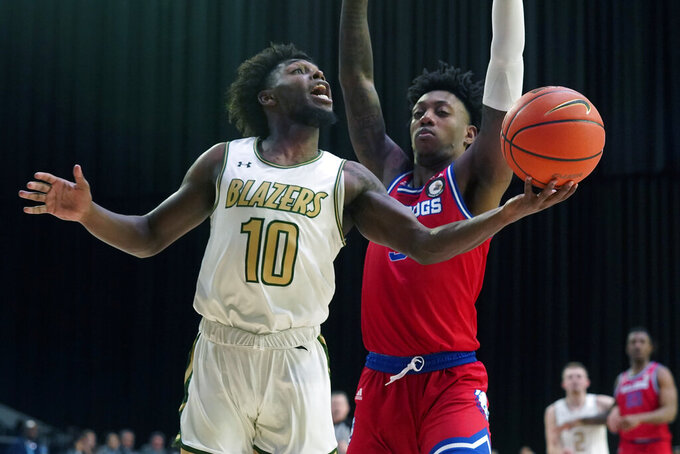 UAB guard Jordan Walker (10) goes in for a layup against Louisiana Tech guard Amorie Archibald (3) during the first half of an NCAA college basketball game for the Conference USA men's tournament championship in Frisco, Texas, Saturday, March 12, 2022. (AP Photo/LM Otero)

FRISCO, Texas (AP) — Jordan “Jelly” Walker made 11 of 11 from the free-throw line and finished with 27 points to help UAB beat Louisiana Tech 82-73 on Saturday night in the championship game of the Conference USA tournament to clinch a berth in the NCAA Tournament.

The Blazers used runs of 14-3 and 14-0 in the first half to take a 19-point lead with 2 minutes left before halftime. Louisiana Tech (24-10) scored the next 11 points to trim its deficit to 43-35 when Kenneth Lofton Jr. scored early in the second half. Lofton scored in the paint and then converted a three-point play with 2:07 remaining to pull the Bulldogs within three points, but Walker answered with two foul shots and they got no closer.

Lofton led Louisiana Tech with 23 points on 11-of-18 shooting and nine rebounds. He scored 17 points in the second half.

Cobe Williams added 19 points and Amorie Archibald 12 for the Bulldogs.

UAB, which set the program's single-season record for wins, beat Middle Tennessee 102-98 in triple overtime in the semifinals. Walker, who was named the tournament MVP, scored 40 points — and went 13 of 13 from the free-throw line — against the Raiders.