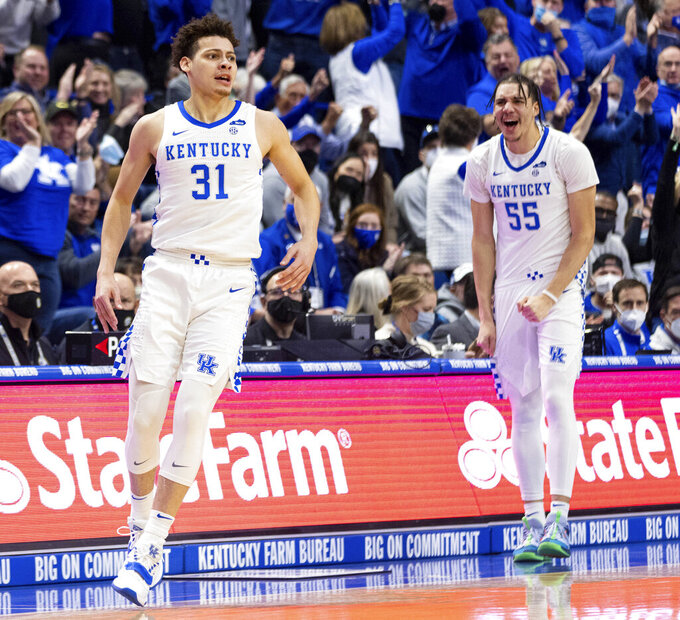 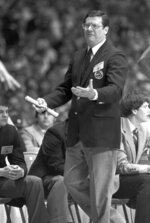 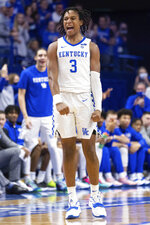 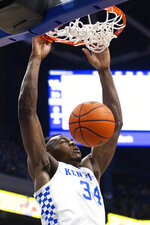 LEXINGTON, Ky. (AP) — Just winning would have been fitting enough to honor the passing of a Kentucky coaching great.

The No. 18 Wildcats took that objective a step further, doing it convincingly with near-perfect offense thanks to a defense that created plenty of easy chances.

Freshman TyTy Washington Jr. scored a career-high 28 points, Sahvir Wheeler returned from injury to add 21 points and Kentucky shot a season-high 68% to blow out No. 22 Tennessee 107-79 on Saturday.

The Wildcats (14-3, 4-1 Southeastern Conference) rolled the Volunteers on an emotional day that began with news of the death of former Kentucky coach Joe B. Hall at 93.

Hall led the program to its fourth national championship in 1978. He was close with current Kentucky coach John Calipari, who paid tribute to his friend and mentor by gripping a rolled-up program and starting in a 1-3-1 defense against their border rivals.

Kentucky then unleashed its most energetic performance this season before its biggest crowd in a while, an effort helped by the return of point guard Wheeler from a neck injury. The Wildcats made their first five shots and 22 of 28 by halftime, with their 78.6% shooting tying a program record set in the first half against Mississippi on Jan. 14, 1981 (11 of 14).

“We wanted to win, and it’s a ranked opponent," Calipari said. "I told them we got a ways to go but this was a step and look, I thought Tennessee played well offensively. They did some good stuff.

"But we were so good offensively, passing it, extra plays. They stretched out their defense and we’re a driving, shoot (a) floater kind of team. That’s what we are, and it kind of worked in our favor.”

Especially for Washington, who scored Kentucky's first basket to jump start a 14-5 lead. He finished 10 of 13 from the field, including 2 of 4 from beyond the arc, topping his previous high of 20 points last matched against Western Kentucky on Dec. 22.

Kentucky teammates followed Washington's lead, with all but one player shooting 50% or better from the field.

“We really just can't rely on Oscar (Tshiebwe) all the time to try to carry us all the time in big games,” Washington said in reference to Kentucky's top scorer and rebounder. “A lot of other guys, we've got to step up as a whole. We all pinpoint that, and I think that helped us today. We all stepped up and executed.”

Kentucky's accuracy held up for nearly 30 minutes before cooling off slightly and finishing 38 of 56 from the field. Kentucky also went 20 for 21 from the foul line to end a two-game home slide against the Volunteers (11-5, 2-3).

Santiago Vescovi scored 20 points and Kennedy Chandler 17 for Tennessee, which shot 53% but wasn't close for the final 30 minutes. The Vols also committed 20 turnovers that Kentucky turned into 32 points.

“I didn't think we started defensively the way we wanted with our scouting report,” Tennessee coach Rick Barnes said. “ We were in the kind of game we thought we'd be in, and then we turned the ball over and they score quick points. You simply can't give a team this good that many points off turnovers. They're gonna shoot 80% if you let them get those runout dunks and those runouts where they were getting to the corner and gonna shoot it.”

Kellan Grady added 16 points and Davion Mintz 10 for the Wildcats, who made 11 of 18 from beyond the arc. Wheeler had eight assists, while Oscar Tshiebwe had 12 rebounds and nine points.

A moment of silence was held for Hall in Rupp Arena before the game. Spectators applauded during a video tribute that included interviews with the coach before fading to black with the words “Joe B. Hall Forever a Wildcat.” Calipari said he'd keep a rolled-up program for Kentucky's remaining games but had never used Hall's 1-3-1 defense that he could recall until Saturday.

“I just didn’t want to give everybody the (idea) we’re going to do it and all of a sudden they come in and throw two dunks," Calipari said. "I told the kids, if they throw it to the corner or middle, go man to man.”

Tennessee would likely have won any other game shooting at such a high rate while knocking down 11 of 23 3-pointers. But it kept the Vols close only briefly because they couldn't match Kentucky's intensity, pace or accuracy.

Kentucky was whole again with Wheeler's return, reclaiming its lightning-quick offensive tempo and defensive intensity. But even that couldn't explain the Wildcats' uncanny shooting that appeared as if they trying to honor the year of Hall's NCAA title.

Kentucky visits Texas A&M on Wednesday night in a meeting of the SEC's top three teams.