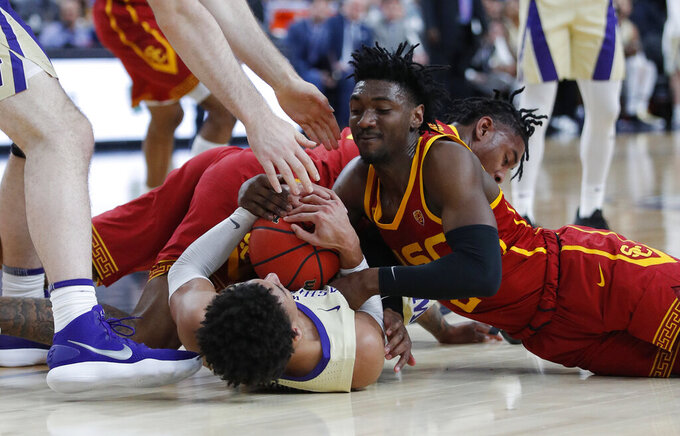 Washington's Matisse Thybulle, bottom left, and Southern California's Jonah Mathews fight for the ball during the first half of an NCAA college basketball game in the quarterfinal round of the Pac-12 men's tournament Thursday, March 14, 2019, in Las Vegas. (AP Photo/John Locher) 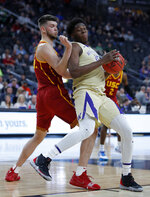 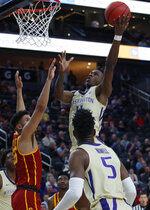 No matter what the Huskies did, even while building a double-digit lead, the Trojans kept coming back.

"USC just kept coming back. You have to give them a lot of credit. They kept fighting back, fighting back," Washington coach Mike Hopkins said. "Our guys showed a lot of resiliency."

Dominic Green answered with a 3-pointer and Matisse Thybulle turned his fifth steal into a breakaway dunk that put Washington up six.

The eighth-seeded Trojans (16-17) still kept fighting, pulling within 77-75 on Nick Rakocevic's putback. Nowell hit 1 of 2 free throws to give USC hope, but Rakocevic threw the ball away as the Trojans tried to set up a tying shot.

"We realized that our defense was the thing that was keeping us in the game," Nowell said. "They hit a couple of big shots, but we just made sure that we kept everything going as far as the defensive end and let the offense flow."

Rakocevic, Mathews and Kevin Porter Jr. each had 17 points.

"We obviously made a few mistakes in the last two and a half, three minutes, like we have many times this season," USC coach Andy Enfield said.

USC earned a spot in the quarterfinals by pulling away from Arizona for a 78-65 victory.

Washington earned a first-round bye by winning the regular-season title, but stumbled down the stretch. The Huskies lost to California, which was previously winless in Pac-12 play, and scored 47 points in a loss to Oregon in the finale.

Washington won the lone meeting with USC this season by 13 after getting 14 steals — seven by Thybulle.

The Huskies were sharp in the rematch, using their defense get baskets in transition and hitting 9 of 18 from the 3-point line to lead 43-38 at halftime.

The Trojans played well, too, hitting 15 of 28 shots from the floor to keep Washington within reach.

Both team downshifted into chaos to start the second half, trading turnovers and clanked shots.

Washington started to settle down a bit and stretched its lead to 64-54 midway through the second half.

USC answered behind its defense, holding the Huskies scoreless for more than three minutes to pull within three with two minutes left.

But in a season of near misses, the Trojans again couldn't make the big plays when they needed to.

"The last couple of minutes was kind of a microcosm of our season," Enfield said. "We're good enough and talented enough to compete. Our players play hard. But our margin of error is so small that those crucial moments, whether it's a turnover, defensive stop, made shot, free throw or last second shot haven't gone our way this year."

USC put up a fight after being down double digits, but couldn't make the plays down the stretch to make it all the way back.

Washington followed the blueprint that led to the Pac-12 regular-season championship, shooting well and clamping down on defense when the Huskies needed it.

USC awaits word if it will be invited to a postseason tournament.