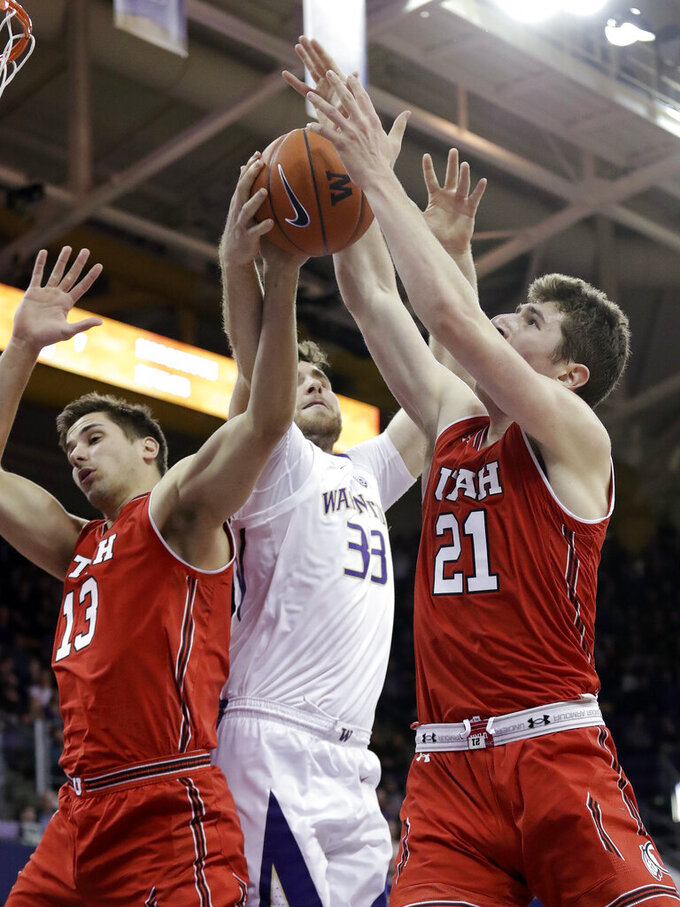 Washington's Sam Timmins (33) and Utah's Novak Topalovic (13) and Riley Battin (21) vie for a rebound during the first half of an NCAA college basketball game Wednesday, Feb. 20, 2019, in Seattle. (AP Photo/Elaine Thompson) 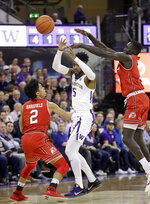 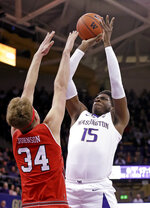 SEATTLE (AP) — Utah entered Wednesday's matchup with Washington knowing it was going to be difficult to score against the Huskies' heralded 2-3 zone defense.

Washington held Utah to just five second-half field goals, outscoring the Utes 29-18 after halftime on way to a 62-45 victory.

"The second half was one of the best periods, 16 or 17 minutes, that we've played all season," Washington coach Mike Hopkins said. "We were active. We were talking. We were aware, and most importantly we finished with rebounding."

The Utes went 11 minutes without a field goal to begin the second half. Parker Van Dyke's two free throws with 15:12 to play where the only points for Utah until Both Gach knocked down a 3-pointer with 8:50 remaining.

The Utes didn't make another shot until Gach hit a floater in the lane with 3:20 to play. Utah finished the second half 5 of 20 from the field, knocking down a 3-pointer and two layups in the final 2:30 with mostly reserves in for Washington.

"To stay in games, you got to be able to make the open ones against this team, because you don't get many open ones," Utah coach Larry Krystkowiak said. "When you aren't making your open ones, free throws included, it's going to be a long night."

Matisse Thybulle, who led the Huskies with six steals and four blocks, said he was so locked in it took him awhile to realize how cold the Utes had gone.

"We were lost in the game," Thybulle said. "When we poked our heads above water we realized what we had done. It was incredible."

The Huskies used a balanced attack as they improved to 13-0 at home. Washington (21-5, 12-1 Pac-12) finished with five players in double figures, led by 12 off the bench from Nahziah Carter, 11 from Noah Dickerson, and 10 each from Thybulle, David Crisp, and Jaylen Nowell.

Utah began the game with a 3-point barrage, hitting five in the first seven minutes. Sedrick Barefield hit four as the Utes jumped out to an early 17-7 lead. But Barefield went to the bench with his second foul at the 7:47 mark, and the Utes shot just 1 of 8 from deep after that.

"We aren't the only team that comes in here or that is playing Washington that is scratching their head trying to figure some things out," Krystkowiak said.

Utah: The Utes are still in the race for second place in the Pac-12 standings.

Washington: The Huskies didn't need much to beat the Utes Wednesday but protected their home court and, with some help, may have a chance to lock up at least a share of the Pac-12 regular-season title with a win Saturday against Colorado.

With six blocks against the Utes, Thybulle moved in to second on Washington's career list, passing Matthew Bryan-Amaning. With 162 in his career, Thybulle sits 24 short of tying Chris Welp for first.

Utah: The Utes travel to play at Washington State on Saturday.