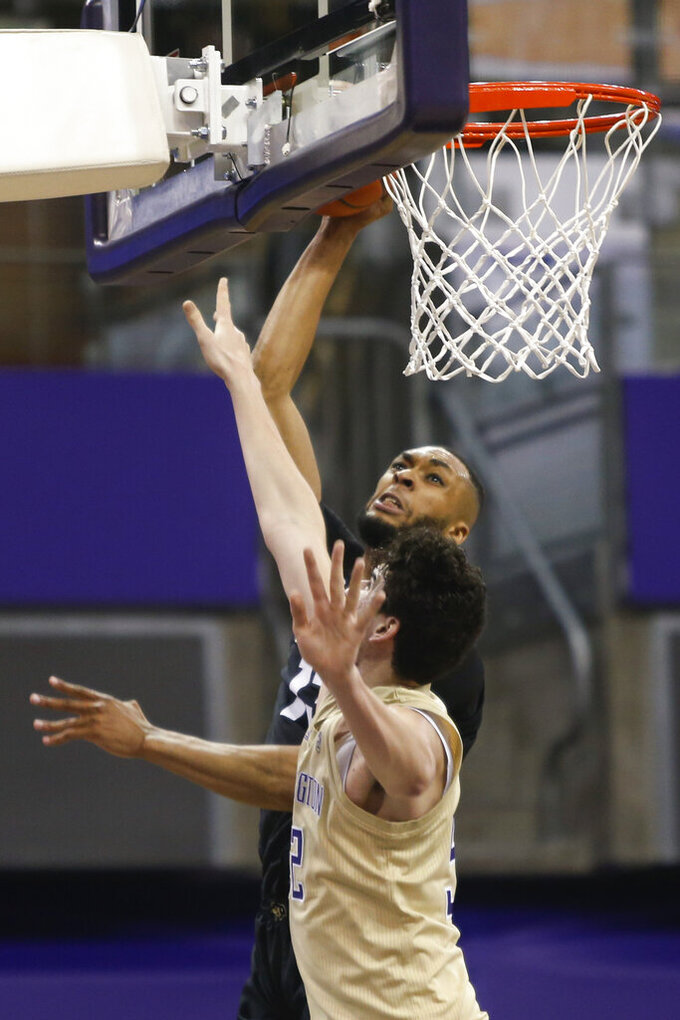 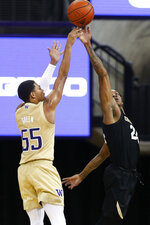 SEATTLE (AP) — Marcus Tsohonis and his teammates celebrated as though Washington had just won something of significance rather than a midseason conference game.

Snapping an eight-game losing streak felt much bigger for the Huskies than just a regular Pac-12 victory.

“The sigh of relief of getting that win was perfect,” Tsohonis said.

Tsohonis scored a career-high 27 off the bench, Erik Stevenson added 17 points before fouling out, and Washington picked up its first conference win of the season beating Colorado 84-80 on Wednesday night.

Tsohonis was brilliant providing the Huskies (2-11, 1-7 Pac-12) a needed punch of scoring off the bench. He topped his career-high of 24 points set just a couple of weeks ago in a loss to Stanford.

Washington's eight-game skid was its longest since the end of the 2016-17 season when the Huskies closed the season with 13 straight losses. Three of the Huskies eight losses during their skid were by more than 20 points.

But the Huskies nearly beat UCLA last weekend in Los Angeles and got the better of the Buffaloes.

“For them to get over the hump, and every team just needs a spark and hopefully that lit a match today for us,” Washington coach Mike Hopkins said.

Tsohonis was 9 of 13 shooting and also hit four of Washington’s 12 3-pointers. The Huskies needed every bit of the outside shooting to counter being dominated on the interior by the Buffaloes.

“I’m just glad that we were able to pull through," Tsohonis said. "Nobody’s really quitting on each other. We’re communicating. It's getting real close.”

Jeriah Horne scored a season-high 24 for Colorado, but missed an open 3-pointer with seven seconds left that could have tied the game. Colorado (11-4, 5-3) saw its four-game win streak snapped and likely lost a chance to move into The AP Top 25 next week.

Colorado coach Tad Boyle called it one of his more disappointing losses.

“The offense was not the issue. Even though it wasn’t great it wasn’t the issue," Boyle said. "The issue was on the other end of the floor, which is something we hang our hat on, but there was no hook tonight.”

Boyle was concerned about letting Washington hang around and it was apparent Colorado missed its chance at an easy victory after the Huskies trailed by 10 late in the first half and pulled within four by the break.

Down 55-48, Washington scored 10 of the next 12 points and took its first lead since early in the first half on Bey’s 3 with 13 minutes left. From there the teams exchanged the lead seven times over the next 10 minutes. Wright’s two free throws with 4:23 left pulled the Buffaloes even at 73-73 after drawing his fifth foul against Stevenson.

Washington finally separated after consecutive baskets from Tsohonis, the second coming off a turnover with 1:04 left and gave the Huskies an 81-75 lead. Washington hit enough free throws and withstood Horne’s open look to tie, and was able to celebrate its first conference win.

Washington was shooting just 40% on the season, but shot 64% in the second half.

“Through all the resiliency and in the games before I think it’s really going to carry over to us moving forward,” Hopkins said.

Colorado: The Buffaloes have been a solid 3-point shooting team this season, making nearly 37% of their attempts coming into the game. But the touch from deep was missing as Colorado went 1 of 18 on 3s. The perimeter struggles were balanced by easy baskets inside. The Buffaloes held a 42-24 advantage on points in the paint.

Washington: The Huskies were thumped by Colorado in a game that didn’t count in the conference standings last month in Las Vegas. Colorado won that game 92-69 after jumping out to a 52-30 halftime lead.

Colorado: The Buffaloes will face Washington State on Saturday.

Washington: The Huskies will host Utah on Sunday.