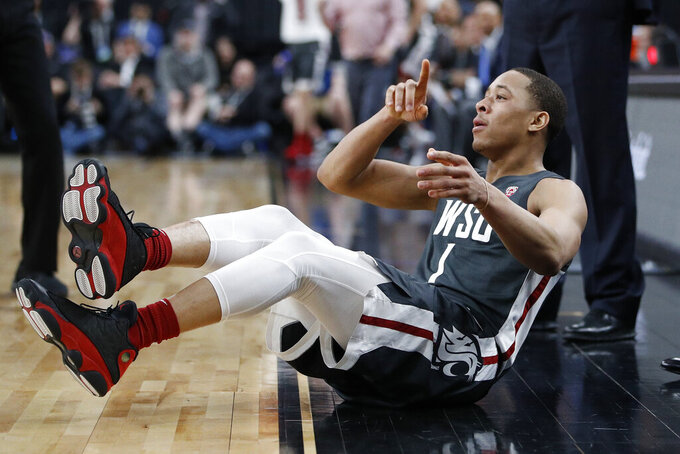 Washington State's Jervae Robinson (1) reacts after making a 3-point shot against Colorado during the first half of an NCAA college basketball game in the first round of the Pac-12 men's tournament Wednesday, March 11, 2020, in Las Vegas. (AP Photo/John Locher)

LAS VEGAS (AP) — A long, eerie day of big news that seemed to come by the minute ended with an upset at the Pac-12 tournament.

Washington State was on the winning side and now, with the rest of the teams left in the bracket, has the bizarre task of trying to continue with no fans in the stands.

CJ Elleby scored 30 points and hit six 3-pointers, helping Washington State knock off Colorado 82-68 Wednesday night in the final Pac-12 tournament game with fans due to concerns over the coronavirus.

“We had a couple of ups and downs, but stayed the course and played one of the better games of the year,” Washington State coach Kyle Smith said.

The Pac-12 followed suit of the NCAA and other major conferences by limiting the final three days of its tournament to essential personnel only.

With a few thousand fans in the stands, the 11th-seeded Cougars (16-16) jumped on Colorado and didn't let up, quickly turning the final game of the opening round into a rout.

Elleby led the way, hitting 6 of 10 from 3-point range, with 10 rebounds, five assists and three steals.

Washington State made 10 of 21 from the 3-point arc and shut down Colorado defensively to earn a spot in Thursday's quarterfinal against No. 3 seed Arizona State in a mostly-empty arena.

“We'll have to bring our own energy,” Elleby said.

Colorado (21-11) should still be in good shape for an NCAA Tournament bid, but will enter the bracket on a five-game losing streak.

The sixth-seeded Buffaloes shot 37% and went 4 for 21 from 3-point range. McKinley Wright IV had 21 points and Tyler Bey 19.

“We've got to find who we were in the first 27 games or we'll be one and done," Colorado coach Tad Boyle said.

Colorado won the team's lone meeting 78-56 by pulling away in the second half.

The Buffaloes came out cold along The Strip, missing 12 of their first 16 shots as Washington State built a 27-13 lead midway through the first half.

The all-conference sophomore forward had a forgettable final weekend of the regular season, shooting a combined 6 for 33 — 1 for 14 from 3-point range — in losses to the Arizona schools.

Elleby was confident and on the mark against Colorado, scoring 13 points in the first 10 1/2 minutes. He had 15 points to give Washington State a 35-25 halftime lead. Colorado missed all eight of its 3-point attempts in the first half.

Elleby hit two quick 3-pointers and Isaac Bonton hit another to stretch the Cougars' lead to 44-26 early in the second half. Colorado scored nine straight points midway through the second half, but that only cut the lead to 57-45.

“I feel like we're going to figure it out,” Bey said. “We've got one more chance to make it in a tournament and we've got to come together as a team and just figure it out.”

The Cougars opened the Pac-12 tournament with a strong performance at both ends to earn another shot at Arizona State, which beat them 83-74 in the regular-season finale.

Once in the mix for the Pac-12 regular-season title, Colorado has a few kinks to work out or it could be a short trip to the NCAA Tournament.