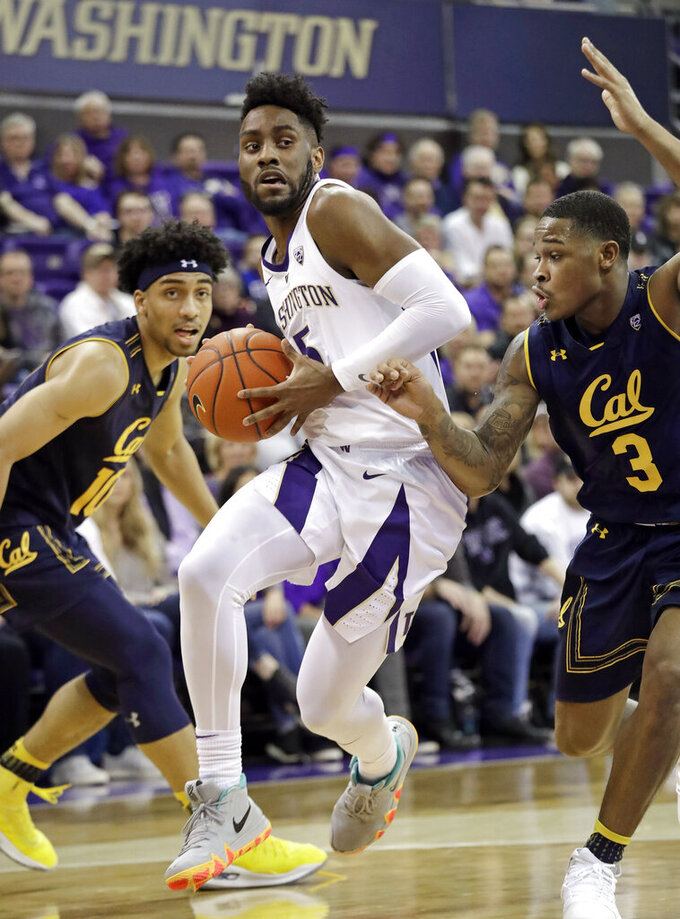 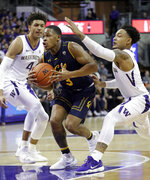 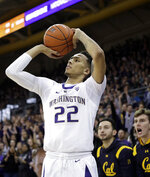 SEATTLE (AP) — Reaching the 5-0 mark in conference play for the first time in 35 years seemed to bring a collective yawn from Washington. The Huskies appear well aware the test of whether they are the best team in a down Pac-12 is about to begin.

"The only thing I think our standing in the Pac-12 and our record so far in conference does is just we're getting everyone's best shot and it makes people want to beat us even more. That means we have to play even better," Washington's Matisse Thybulle said. "We're accepting the challenge and we're going to take it head on, and it's exciting."

Dominic Green hit four 3-pointers and scored 17 points off the bench, Thybulle added 13 points, and Washington improved to 5-0 in conference play for the first time since the 1983-84 season with a 71-52 win over California on Saturday.

Washington (14-4, 5-0 Pac-12) won its seventh straight overall, but this one won't be an attractive addition to the season resume. The Huskies missed 13 of their first 14 shots and committed nine turnovers in the first half, trailing by as many as 11 against the Golden Bears. But the Huskies rallied to remain perfect in conference play and will have a chance to match the mark of the 1983-84 team which started its conference schedule 6-0.

But Washington has benefited from a favorable early schedule that's about to get tougher. Four of Washington's next six are on the road with trips to the Oregon and Arizona schools.

"It's just a record and at the end of the day we've got Oregon and Oregon State. That's what we have to be concerned about," Washington coach Mike Hopkins said.

Sparked by Green's shooting from deep, the Huskies rallied to take the lead before halftime and pulled away in the second half. Washington was fortunate to make 10 3-pointers as it struggled to get inside looks against California's zone defense. It was the fourth time this season the Huskies hit at least 10 3s in a game.

David Crisp and Noah Dickerson both added 12 points and Jaylen Nowell had 11 as Washington put five players in double figures for the second time during its seven-game win streak. The Huskies also had five in double figures in their win over Cal State Fullerton.

Washington's win was its 1,000th all-time at Hec Edumundson Pavilion, becoming the first Division I team to reach 1,000 wins in one arena.

Paris Austin and Andre Kelly led California (5-13, 0-6) with 12 points each, but the Golden Bears lost their seventh straight despite giving Washington problems in the first half. The 52 points were a season-low for Cal, and the Bears shot just 30.5 percent, hitting a season-worst one 3-pointer.

"We battled tonight, we just couldn't hit a shot," Cal coach Wyking Jones said. "We started the game out getting stops and getting out in transition and I was happy to see that, but we really struggled against their half-court zone."

Washington somehow led 29-28 at halftime despite one of its ugliest halves of basketball all season with the missed shots and early turnovers. But a run of 3-pointers by Green settled Washington down and Nowell's transition layup in the final minute gave the Huskies the lead at the break.

The lead quickly ballooned to start the second half as Washington scored 18 of the first 25 points, including 3s from Thybulle, Nowell and a pair from Crisp to take a 47-35 lead.

"We were just stagnant. We would run one of our plays, guys were not running the play or they were running it incorrectly. ... The key was just settling down and executing our game plan," Hopkins said.

Washington did get a scare as forward Hameir Wright left early in the second half with an apparent hand/wrist injury bracing himself after a fall. He returned to the bench with his left thumb and wrist taped but never re-entered the game. Hopkins said Wright had injured the wrist during a fall in practice and appeared to aggravate it, but the injury did not appear to be serious.

California: Leading scorer Justice Sueing had a tough afternoon. Sueing was 2-of-11 shooting and finished with eight points. He was averaging 14.4 entering the game.

Washington: The Huskies continue to do a good job of keeping opponents from have success beyond the 3-point line. California was 1 of 15 on 3s, the fifth time in the past seven games a team has shot under 30 percent from deep against Washington.

California: The Bears return home to face Colorado on Thursday.

Washington: The Huskies travel to Oregon on Thursday night.