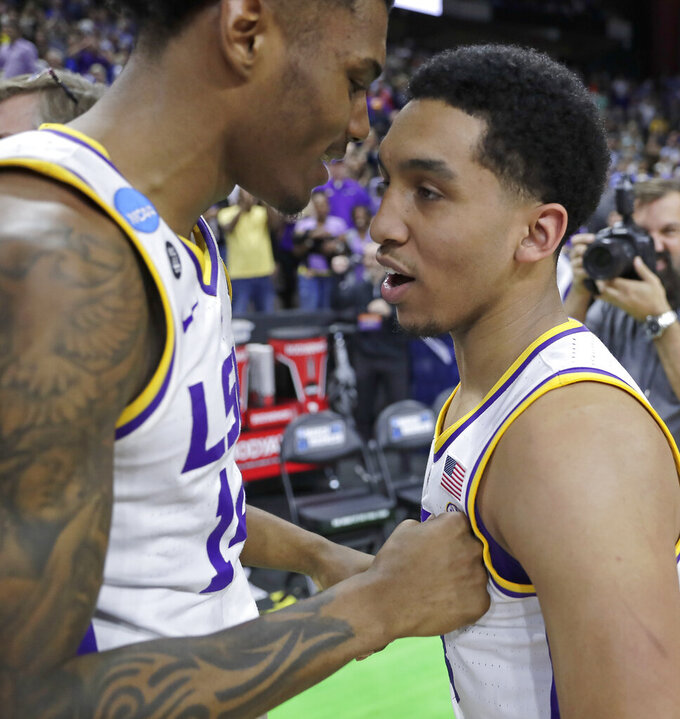 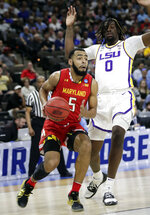 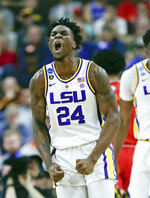 JACKSONVILLE, Fla. (AP) — It's probably the same play suspended LSU coach Will Wade would have called.

After all, it worked several times during the regular season. And now it has the Tigers in the Sweet 16 for the first time since 2006.

Tremont Waters drove by three defenders and scooped in a banking layup with 1.6 seconds remaining to give third-seeded LSU a 69-67 victory over sixth-seeded Maryland in the second round of the NCAA Tournament on Saturday.

After Maryland's Eric Ayala failed to get off a shot from midcourt before the final buzzer, LSU players mobbed Waters under the basket. They could have done the same to Skylar Mays, who scored 16 points and hit a huge 3-pointer with 40 seconds remaining that put the Tigers (28-6) up 67-64.

Jalen Smith answered on the other end, sending the packed crowd into a frenzy and prompting LSU to call timeout.

Benford dialed up the final play for Waters, a dynamic sophomore who has been terrific all season.

"The players knew exactly what was coming," Maryland coach Mark Turgeon said. "We all knew what was coming. It was whether we were going to be able to stop it or not."

The 5-foot-11 Waters got a pick from big man Naz Reid, drove into the lane and somehow got off the winner.

"I was in the bottom of the dog pile, and just the feeling, it feels amazing," said Waters, who laughed off those who questioned whether he traveled. "I'm going to continue to do everything I can to help this team win and just keep pushing for my guys."

Wade could only celebrate from afar. The head coach was banished indefinitely after details emerged about him talking to a recruiting middleman about a "strong ass offer" he made to a high schooler. If true, Wade clearly violated NCAA rules.

Maryland fans had some fun with the allegations.

One fan unhappy with the refs yelled "How much did Will Wade pay you?" Others chanted "Where's your coach?" during timeouts.

Regardless, the Tigers advanced in the East without Wade and mired in controversy. They will face No. 2 seed Michigan State on Friday.

They also dedicated the season to the memory of Wayde Sims, their teammate shot and killed in late September.

"It's huge for these guys," Benford said. "They're the ones that paid the price. They've been through a lot. ... I give it to these guys. They have taken ownership of this team."

LSU outscored Maryland 34-24 in the paint.

The Terrapins (23-11) rallied from a 15-point deficit in the second half to make it a nail-biter down the stretch. Coach Mark Turgeon switched to a zone defense, which slowed Waters, and his guys started making shots. They even had a 3 point lead with 5 minutes to play.

"I never thought we were going to lose until the kid made the lay-up, to be honest with you," Turgeon said.

Maryland trailed 46-31 with 16 minutes remaining after Turgeon was hit with a technical foul. But the call seemed to ignite — or maybe infuriate — Maryland.

Maryland entered the postseason with the fourth-youngest team in the country, according to KenPom. Kentucky is the only team in the NCAA field with a younger roster. So the Terrapins could be in position for another run in 2020.

"I always grew up watching these type of games, these big-time games," guard Darryl Morsell said. "So just to be able to be in it, it's a great feeling, and just to have all these young guys coming back and stuff, it's just going to make us hungrier."

LSU improved to 13-5 in games decided by 6 points of less, and Waters has been a big reason for the late-game success.

Maryland waits to see what Fernando does regarding the NBA. The 6-foot-10 sophomore entered the draft after his freshman season, but returned to school and averaged 13.7 points and 10.5 rebounds.

LSU will play the Michigan State winner in Washington D.C. on Friday.