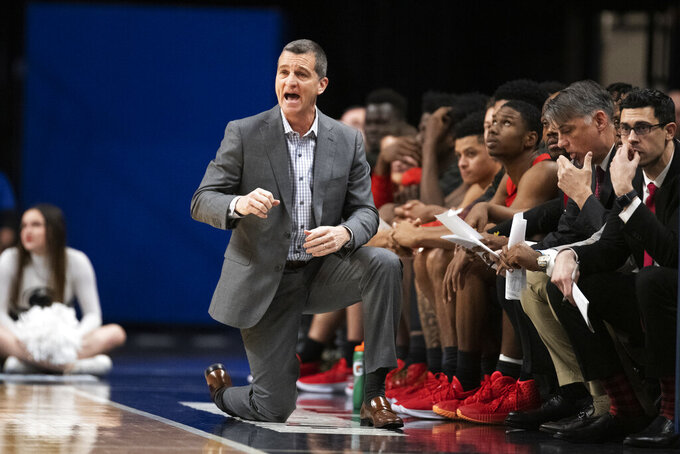 Maryland head coach Mark Turgeon reacts to a call in the first half of an NCAA college basketball game against Penn State in State College, Pa., on Tuesday, Dec. 10, 2019. (AP Photo/Barry Reeger) 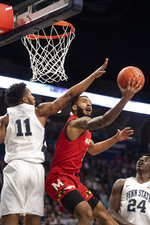 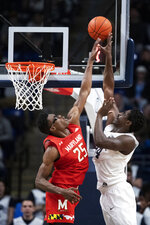 STATE COLLEGE, Pa. (AP) — At 6-foot-9, Mike Watkins always stands out in a crowd. Even one that’s made up of hundreds of screaming fans.

Watkins pumped his fists as swarms of his classmates poured onto the court after Penn State joined a series of unranked teams to knock off top-5 opponents this season, beating No. 4 Maryland 76-69 on Tuesday night.

“What a home-court advantage we had tonight,” Penn State coach Patrick Chambers said. “There were situations where I couldn’t hear in the huddles. I couldn’t hear our guys on the bench.”

But Chambers could see everything unfolding in front of him, including some of the best defense he’s witnessed in his tenure.

Penn State finished with 10 blocks, 10 steals, forced 20 turnovers and held the Terrapins to 19-for-57 shooting.

Jalen Smith had 12 points and 11 rebounds for the Terps (10-1, 1-1) who were trying for their first 11-0 start since 1996. Maryland became the fifth top-5 team to lose to an unranked opponent this season and was followed minutes later by the sixth, No. 1 Louisville, which fell to Texas Tech at Madison Square Garden in New York.

The Nittany Lions trailed 10-9 early before taking control. They forced 12 turnovers in the first 10 minutes, fueling an 18-5 run capped by a 3-pointer from Dread that made it 27-15.

Penn State took a 40-30 lead into halftime after a buzzer-beating 3-pointer from Jones off an inbounds play.

They wouldn’t get any closer.

“We competed in that second half,” Maryland coach Marc Turgeon said. “We tried as hard as we could try. We just couldn’t get over the hump.”

NO NEED FOR WORRY

Chambers said he was “worried” about his team after the Nittany Lions were hammered by No. 6 Ohio State 106-74 on Saturday in a game that saw Stevens foul out with more than 13 minutes left.

“In previous years, one loss may lead to two, two to four, four to 10. But this team is different,” Stevens said. “It was always like (if we won) a hero would step up. The reason we won this game is because everybody contributed in big moments.”

The Terps had to battle back from a 15-point halftime deficit against Illinois on Saturday and started slowly again. Turgeon said his team has more to improve upon than its ranking would suggest.

“We have a long ways to go as a team and sometimes when you keep winning, you don’t realize it,” Turgeon said. “Hopefully with this loss, our guys will realize we have a long way to go to get where we need to be.”

The other stat category that jumped out to Maryland’s coach?

“We wanted to lead the country in dribbling tonight,” Turgeon said.

Maryland: The Terps fell behind early for a second straight game and it didn’t work out as well against a bigger, more skilled opponent.

Penn State: The Nittany Lions have beaten top teams at home in the Chambers era, but those wins have usually come later in the season. Their last win over a top-5 team was Feb. 17, 2016, when they knocked off then-No. 4 Iowa.