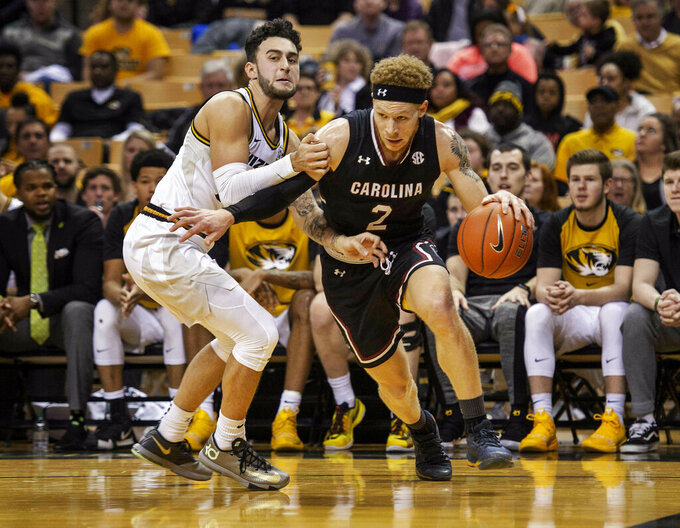 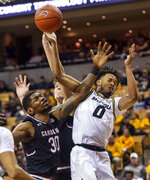 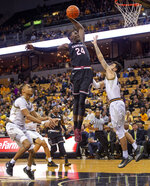 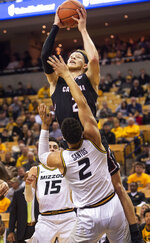 COLUMBIA, Mo. (AP) — The youth movement has helped sustain Missouri basketball all season. A trio of freshmen — Javon Pickett, Xavier Pinson and Torrence Watson — have given hope to Tigers fans in a year where postseason play is unlikely.

Watson was the star against South Carolina on Saturday. The freshman guard scored 20 points and showcased his range, hitting a pair of clutch 3s down the stretch to keep the Gamecocks at bay. Missouri proceeded to defeat South Carolina 78-63.

The Gamecocks cut the Tigers' lead from 10 to four with 5:54 remaining. On the next possession, Watson drilled a 3-pointer. After another Gamecocks' basket, Watson knocked down a triple to extend Missouri's lead to eight with 4:34 left.

Missouri (13-15, 4-12 Southeastern Conference) held off South Carolina's push from that point on. It was Watson's second consecutive game as the team's leading scorer. He finished 4 for 9 from beyond the arc.

"Tonight, I was just feeling it," Watson said. "My teammates did a great job of getting me the ball. It makes a really big difference when you see shots go in."

Hassani Gravett led South Carolina (14-15, 9-7) with 20 points. But the team's leading scorer for the season, forward Chris Silva, was in foul trouble all game and fouled out with 1:44 remaining. He played just 15 minutes and scored 12 points.

"(Silva) creates a lot of activity on both sides of the ball," Missouri coach Cuonzo Martin said. "When he's in foul trouble, that's a different team."

The Tigers took advantage of Silva's limited time. Forward Kevin Puryear scored 18 points, including 8 for 9 from the free-throw line. Puryear is averaging 6.9 points per game and has not scored in double-digits in conference play this season.

"I've really been struggling in SEC play as far as putting the ball in the hole," Puryear said. "To finally see the ball go through the rim like that is a good feeling."

The Gamecocks also played without their second leading scorer, freshman A.J. Lawson, who suffered a low left ankle sprain in the second half of South Carolina's game against Alabama on Tuesday.

South Carolina: The Gamecocks faced an uphill climb to reach tournament play entering Saturday. A loss to Missouri may have killed their chances. South Carolina will likely have to win out in the regular season and put together a strong conference tournament showing to be considered for the tourney.

Missouri: The Tigers have played tough in recent home games, and this was another example. Missouri is not in the tournament picture, but play like today's could help the Tigers reach the .500 mark by the end of the season.

In his postgame press conference, Frank Martin emphasized South Carolina's fatigue in the second half, where it was outscored 49-38 and outrebounded 19-12.

"I was scared that we'd get tired, which happened," he said. "We're in a place where we're very shorthanded, obviously, and have no depth."

FRESH ON THE SCENE

Entering Saturday, 62.2 percent of Missouri's scoring this season had come from freshmen and sophomores. Watson's game-high 20 points marked the third time in the last five games a freshman led the Tigers in scoring.

South Carolina will play visitor to Texas A&M on Tuesday.

Missouri plays its final road game on Wednesday against Georgia.