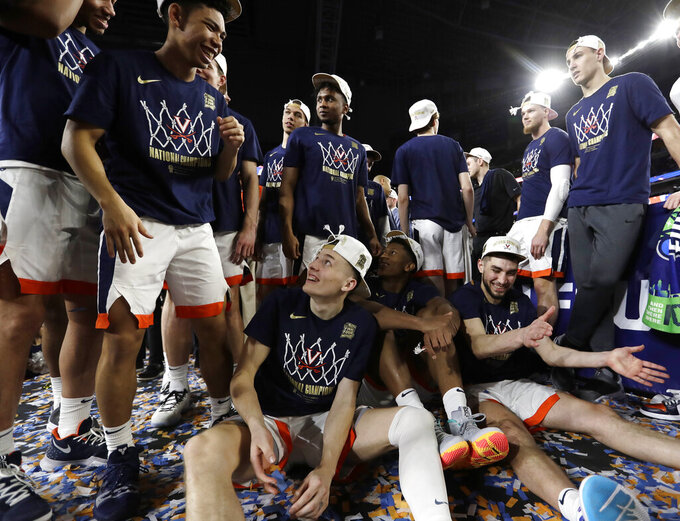 MINNEAPOLIS (AP) — Virginia pulled off one of the great redemption stories in NCAA Tournament history, winning its first national title a year after losing to a No. 16 seed in the first round.

The bad news: it's seven months until the next season.

The confetti is still being swept up in Minnesota, but it's never too early to start looking ahead for college basketball fans.

OK, maybe it is a little too early, but we're going to do it anyway.

1. Michigan State. The Spartans made it to the Final Four without Joshua Langford. He should be healthy and nearly everyone should be back.

2. Virginia. De'Andre Hunter is a projected NBA lottery pick, so he's likely be gone. If Ty Jerome returns, the Cavaliers could be in the running for a second straight title.

3. Kentucky. Another year, another big roster turnover. Then again, Coach John Calipari has another stellar recruiting class coming in.

4. Michigan. The Wolverines were not supposed be this good this year. Even with Charles Matthews likely leaving, they're expected to be good in 2019-20 if no one else leaves.

5. Duke. Zion, R.J. and Cam will not be back. Tre Jones is, so the Blue Devils should be in good shape with another top-notch recruiting class coming to Durham.

6. Marquette. Ranking the Golden Eagles this high is all about Markus Howard. He doesn't come back, they drop several spots.

7. Gonzaga. Rui Hachimura may leave Spokane early, but if Brandon Clarke doesn't, watch out for the Zags.

8. Oregon. No Bol Bol (likely), but Payton Pritchard, Louis King (maybe) and a strong recruiting class is going to be tough to beat.

9. Kansas. The Lawson brothers are gone, but getting the big Doke back is huge for the Jayhawks.

10. Maryland. Losing Bruno Fernando would hurt, but there's a lot coming back.

11. Ohio State. The starting backcourt graduates, but there are plenty of good young players to step up.

13. Louisville. Leading scorer Jordan Nwora could be off to the NBA, but Chris Mack is already pulling the recruiting strings.

14. Arizona. Sean Miller regained his recruiting prowess with another stellar group coming in, though the federal investigation still hangs over the program.

15. Villanova. The loss of Eric Paschal and Phil Booth puts a big dent in the Wildcats' leadership, but Jay Wright has dipped into the five-star recruiting pool with one of the nation's top classes.

16. LSU. Another team caught up in the federal recruiting investigation. The Tigers have plenty coming back, though, particularly if point guard Tremont Waters stays.

17. Florida State. Mfiondu Kabengele and a pair of top recruits should help make up for the losses of five seniors.

18. North Carolina. The Tar Heels will have a massive roster turnover, but Ol' Roy should have high-quality replacements for them.

19. Tennessee. Grant Williams and Jordan Bone returning could make the Vols a top-10 team. They'll be solid even if both leave.

20. Arizona State. The Sun Devils may lose Luguentz Dort and Zylan Cheatham graduates, but nearly everyone else should be back from an NCAA Tournament team.

21. Auburn. A healthy Chuma Okeke and getting Jared Harper back could lead to another deep Tigers run.

22. Seton Hall. The Pirates have plenty coming back and Myles Powell would make them a Top 25 team.

23. Saint Mary's. The Gaels get nearly everyone back from their tournament team.

24. Iowa. This could be Fran McCaffrey's best team in Iowa City.