Webber's TO vs Tar Heels among iconic March Madness moments 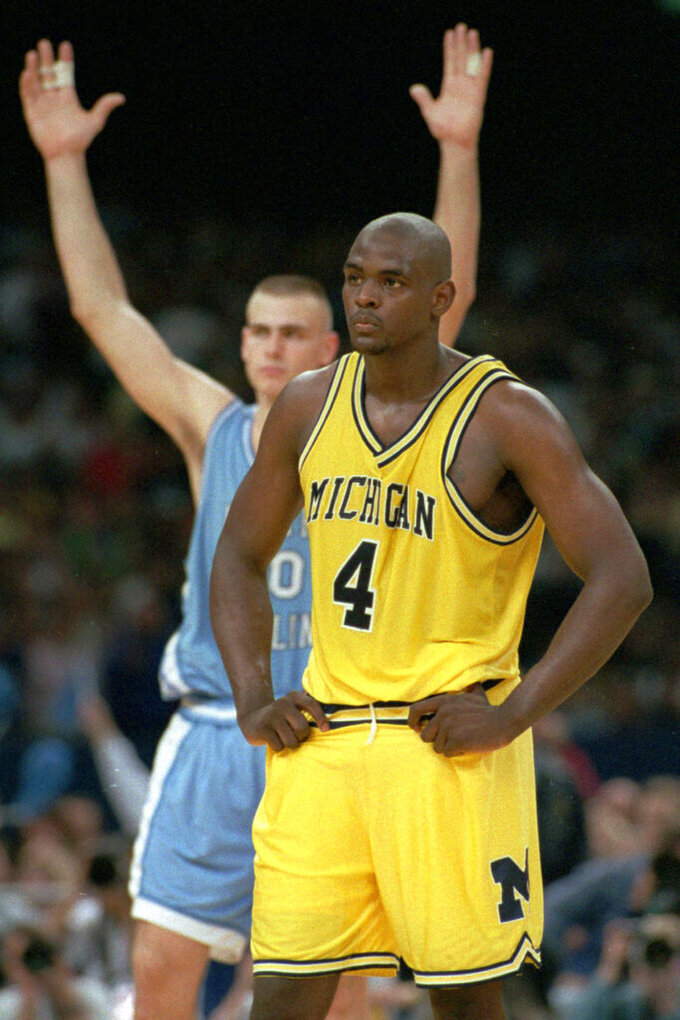 FILE - In this April 5, 1993, file photo, Michigan's Chris Webber (4) stands by as North Carolina's Eric Montross celebrates during North Carolina's technical foul shots in the final seconds of the NCAA Final Four championship game at the Superdome in New Orleans. Webber called a time out Michigan did not have, and Michigan was charged with a technical foul and lost possession of the ball. Donald Williams made all four free throws and North Carolina won the national title 77-71. (AP Photo/Susan Ragan, File) 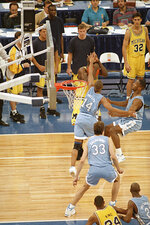 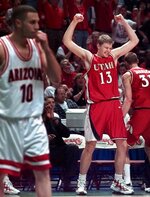 The most famous timeout called in the history of the NCAA Tournament has been variously called the biggest mistake, the biggest choke, the most embarrassing gaffe, all because that timeout didn't actually exist.

It was the waning seconds of the 1993 title game, and Michigan star Chris Webber had just pulled down a rebound off a missed foul shot by North Carolina with 20 seconds left. He appeared to travel and signal for timeout, then ultimately dribbled up the floor with all the grace of a baby giraffe before whirling around amid a double-team and calling again for timeout.

Fans tend to remember that much. They also remember the incredulous voices of CBS broadcasters Jim Nantz and Billy Packer exclaiming that the Wolverines had no timeouts, and the ensuing technical foul effectively ended the game.

Fans don't seem to remember that part of the equation. And when the Tar Heels went on to beat Michigan and its Fab Five, 77-71, the Webber timeout went down in history as one of the tournament's key plays.

“It wasn’t Michigan or national championship-dependent,” Montross told The Associated Press. “It was, ‘If we were going to trap somebody in the backcourt, as we did with Chris before on the other end of the court, who do we want to trap?’ We wanted to trap him with Derrick Phelps and with George Lynch, our two very best defensive players. And that’s who did it there, too. So I think if you look at the setup and the lead-up to this, it became a decisive mistake.”

For the Wolverines, at least. For the Tar Heels, it was perfectly played defense in crunch time.

Every year there are crucial plays during the NCAA Tournament — except this one, of course, with the event called off due to the coronavirus pandemic. Some go down in history because of player or circumstance. Some are instantly recognizable and others go largely unnoticed. All tend to shape who ultimately hoists the trophy at the end.

Here is a look at some other key calls over the years:

Nobody expected Utah to wallop reigning national champion and No. 1 seed Arizona when they met in the Elite Eight of the 1998 tournament. But it happened because nobody from the Wildcats expected Utes coach Rick Majerus to unveil what he called the “66 defense,” or what is more commonly known as a triangle-and-two zone.

The Utes, who had struggled to survive the previous two rounds, slapped it on a team that returned its top six players from the year before. And by the end of the game, Arizona stars Mike Bibby, Michael Dickerson and Miles Simon were a combined 6 of 36 from the field, and the Utes continued their march to the title game, where they finally lost to Kentucky.

First Four games can be wildly unpredictable, but Iona and BYU took that notion to another level in 2012. The Gaels raced to a 25-point lead and were on their way to an easy victory when everything suddenly unraveled.

Sure, the Cougars' Brandon Davies and Noah Hartsock were spectacular in the waning minutes of the first half, when BYU ripped off nine straight points, and the second, when it outscored the Iona 38-17. But it was the Cougars' decision to ditch a man-to-man defense in favor of a half-court zone, slowing down the tempo and stopping the Gaels dead in their tracks.

It remains the biggest comeback in NCAA Tournament history.

Sometimes the key moment in an unexpected march to the Final Four comes not on the floor, or through X's and O's, but in a couple of choice words told in a sideline huddle. That was the case for George Mason in the 2006 tournament, when the No. 11 seed had just watched heavily favored UConn tie the game in the closing seconds.

“I knelt in front of my team, and the five starters were facing me as they sat on the bench. And I can remember exactly what I said to them,” said Jim Larranaga, now the coach at Miami. “I said: ‘Guys, we didn’t play defense for five seconds. Now we've got to play defense for five minutes. But you know what? There isn't a place on Earth I would rather be than right here with you guys, playing UConn with a chance to go to the Final Four. Where else would you rather be?'”

Any tension immediately evaporated, and the Patriots beat the Huskies 86-84 in overtime to reach the Final Four.

Those moments are but an example of how key plays often go overlooked. But there are just as many plays during the NCAA Tournament that stand the test of time simply because they are so obvious: the winning shot by Valparaiso's Bryce Drew against Ole Miss; the 3-pointer by guard Mario Chalmers that took Kansas to overtime in the title game against Memphis; the full-court drive by Tyus Edny that kept alive UCLA's national championship hopes.

It's all part of the madness of March, which basketball fans missed out on this year and are eagerly awaiting next.