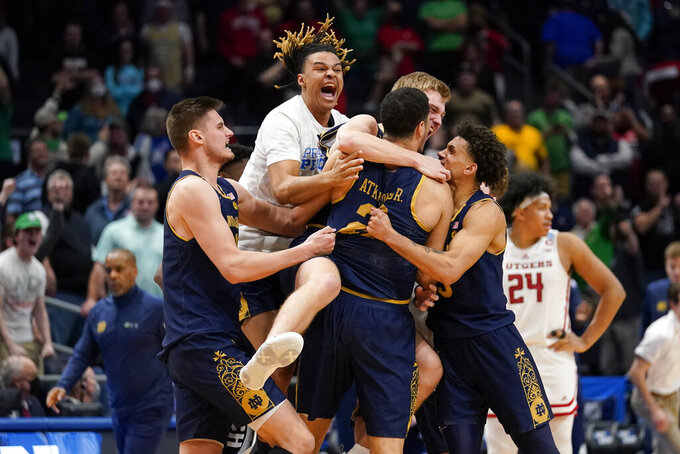 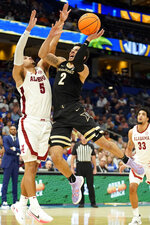 SAN DIEGO (AP) — While Notre Dame was playing deep into the night to move into the main NCAA Tournament bracket, Alabama was already enjoying itself in sunny San Diego.

Besides being well-rested for its West region first-round game against the Fighting Irish on Friday, sixth-seeded Alabama (19-13) hopes playing the nation's toughest schedule will pay off with a deep run.

Alabama beat three of last year’s Final Four teams this season, including No. 1 overall seed Gonzaga. The Crimson Tide topped the Zags 91-82 in Seattle on Dec. 4, beat Houston 83-82 a week later and then beat defending national champion Baylor 87-78 on Jan. 29 in the Big 12/SEC Challenge.

Alabama lost to Davidson in Birmingham on Dec. 21. Davidson is seeded No. 10 in the West and will play No. 7 Michigan State in Greenville, South Carolina.

“I think we’re battle-tested,” said Oats, who added that the No. 11 seed Fighting Irish (23-10) “are not quite as deep as we are. And they’re coming off having to play Wednesday and then Friday. Hopefully we can get into their depth a little bit. But they control tempo pretty well, too, and don’t play particularly fast. I’m sure they’ll try to do that again tomorrow.”

Notre Dame beat Rutgers 89-87 in double overtime in a First Four game in Dayton, Ohio, that ended just after midnight.

Alabama hasn’t played since March 10, when it lost to Vanderbilt in the Southeastern Conference Tournament. Last year, the Crimson Tide lost in the Sweet 16 to UCLA as a No. 2 seed. The 11th-seeded Bruins went on to the Final Four.

Duke is trying to get its defense back to where it was earlier this season.

“It’s been a huge week mainly focusing on the defensive end,” Wendell Moore Jr. said. “Getting more pressure on the ball, forcing a lot of live-ball turnovers, just so we can really get into our offense easier.”

The matchup with Michigan State features a reunion between Davidson junior Foster Loyer and his former program.

“He’s done a great job, and I think Bob’s a great fit for him,” Izzo said. “It’s kind of like everything else in the world. You’ve got to get the right match.”

Loyer said his phone “started to blow up pretty quickly” the moment the matchup was set.

“For me it was important just to kind of shut it down, block everything out,” Loyer said. “I obviously heard from a lot of my friends and family, a lot of good lucks, a lot of congratulations. But at the same time for us, it’s been focusing on doing what we need to do to prepare and not letting anything take us off that course.”

Junior guard Kevin McCullar is the only player on Texas Tech’s roster who was with the Red Raiders during their Final Four run in 2019, when he redshirted with an injury. The Red Raiders lost to Virginia in the national championship game.

“The Final Four run, I’ll never forget it,” McCullar said. “It was so vivid. I still see it to this day. After we lost that championship, seeing everyone crying, just motivated me to want to get there so bad.”

McCullar stuck around when Mark Adams was promoted to head coach after Chris Beard left for rival Texas.

“With the coaching change with coach Adams, he’s done a great job,” said McCullar, who missed eight games with an ankle injury. “That’s the main reason I stayed, to stay with him. When we brought in a bunch of new guys and stuff, we all just jelled so easily.”

It’s been a good year for Montana State sports teams. In football, the Bobcats reached the FCS national championship game, losing to North Dakota State. The men’s basketball team is in the NCAA Tournament for the first time since 1996 and the women’s team also reached the NCAAs. Both squads won Big Sky Conference tournament titles.

“It’s just an unbelievable time to be a Bobcat,” swingman Abdul Mohamed said. “Our sports programs have been doing so well. We’re a family, big family. We support one another and everybody knows everybody.”

Coach Danny Sprinkle was a freshman on the 1996 team that was seeded No. 13 and lost to No. 4 seed Syracuse 88-55 in Albuquerque, New Mexico.

“It’s awesome,” Sprinkle said. “It’s almost better, just to see the excitement on our players’ faces and to see some of our fans that were literally in tears in Boise. That’s how excited they were for this moment and how long they’ve been waiting for it. And it’s an unbelievable experience.”

Cal State Fullerton is in the NCAA Tournament for the first time since 2018 and the third time overall. Ninth-year coach Dedrique Taylor wants his Titans to savor it.

“I’ve encouraged them to document it because it’s life-changing,” Taylor said of the days since the team won the Big West Conference title.

The Titans are led by Tennessee transfer E.J. Anosike, a 6-foot-7 forward averaging 16.5 points. He also leads the team in rebounding (8.3 per game) while shooting nearly 52% from the floor and 78% from the foul line.

The Titans made the tournament despite starting 0-2 and not climbing past .500 until the second half of December.

“Just a different type of feeling for this group because I remember the days in December when we were (4-5) and I was not sure,” Taylor said. “Hell, I didn’t even want to go to practice the next day with this group and I didn’t want to have anything to do with them.

“But we’ve endured those things and we’ve gotten through that.”