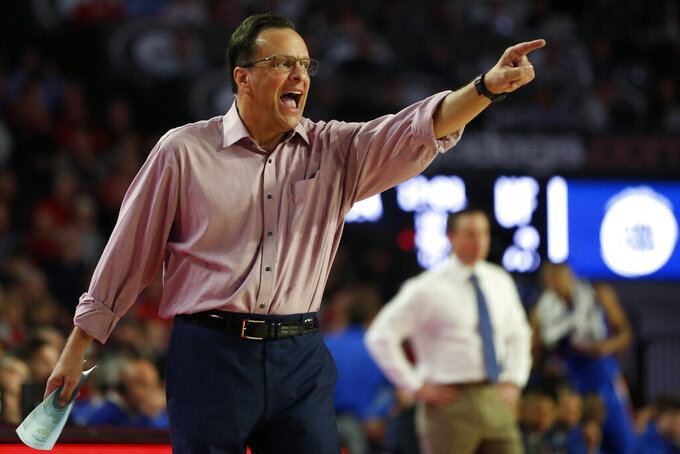 Tom Crean is thrilled to see sophomore Sahvir Wheeler emerging as the leader on a Georgia team that must replace high-scoring Anthony Edwards.

Wheeler is only a sophomore, but as the starting point guard his leadership on and off the court is important.

Crean is entering his third season as Georgia's coach. He says “without a doubt” Wheeler has taken more responsibility on the team.

“I think he has to be because he’s the point guard,” Crean told The Associated Press on Monday. “And he’s got that personality. He’s the guy who does things that maybe not everybody else sees. He’ll organize the guys to be in there early on his own to go over offense. Sahvir is really concerned about making sure we have good practice. I think for a player that young to feel that way is a really, really good sign of leadership.”

Edwards is expected to be one of the top picks in the NBA draft on Nov. 18. Forward Rayshaun Hammonds also entered the draft after averaging 12.9 points as a junior.

The departures of Edwards and the 6-foot-9 Hammonds left Crean with a young and undersized roster.

Wheeler is the top returning scorer. He averaged 9 points and 4.5 assists. Sophomore forward Toumani Camara is the only other returning starter. Junior guard Tye Fagan has played in all but one game in Crean's two seasons.

“The fact we’ve got three seniors, it’s just monumental for us to have three guys that have been well-coached,” Crean said. “After losing Rayshaun, to have those three guys, they bring such a level of maturity, a spirit. They’re learning new things but they already know a lot.”

MORE ON THE TRANSFERS

Horne, from Tifton, Georgia, started 30 games for Virginia Tech last season and averaged 7.6 points. Garcia was the America East Conference’s Sixth Man of the Year in 2019 and averaged 10.1 points in 77 career games. Kier missed most of last season with a stress fracture in his right foot after having scoring averages in double figures two consecutive seasons.

Wheeler set the Georgia freshman record with 139 assists last season. Litterial Green had 133 assists as a freshman in the 1988-89 season. Wheeler finished with eight assists, matching his career high, in Georgia's win over Mississippi in the SEC tournament. The remainder of the tournament was canceled due to the outbreak of the coronavirus pandemic.

Crean says he expects attendance to be capped at about 20 percent of the 10,523 capacity of Stegeman Coliseum, or about 2,500 fans. Georgia set a school record with 11 crowds of at least 10,000 fans last season.

The Bulldogs set school records for total home attendance in each of Crean's two seasons. There is no way to continue that momentum during the pandemic.

“You’d certainly love the opportunity to do it a third year in a row, but it’s not going to be that way,” Crean said. “It’s not going to be that way for anybody. ... Your disadvantage is if you don’t max out what you have. That means everybody who is in there is into it and they’re vocal and excited and we do a good job with the music and the video boards and all the things to make it an energetic atmosphere.”

Georgia will open against Gardner-Webb on Nov. 29 and also has games planned against Samford and Northeastern before opening its 18-game SEC schedule against Mississippi State on Dec. 30.