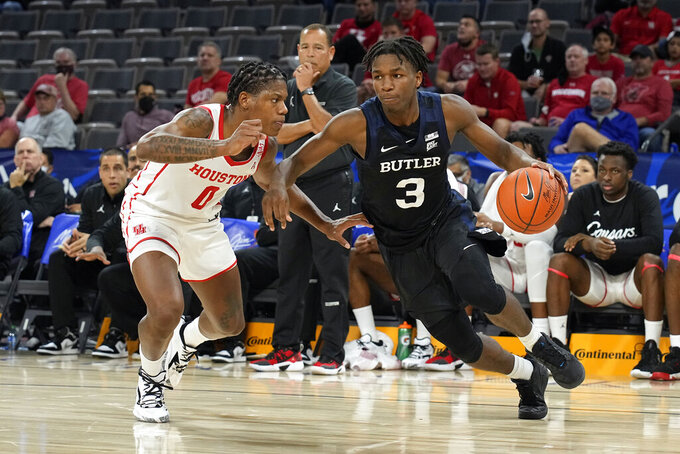 LAS VEGAS (AP) — Houston did not give Butler an inch in a dominating defensive first half, looking every bit like a team ready to make another deep NCAA Tournament run.

Playing with a big lead, the Cougars backed off a bit and needed time to rev it up again.

A lopsided win, just not as complete as it could have been.

Fabian White Jr. scored 21 points and No. 12 Houston rode a dominating first half to a 70-52 win over Butler Monday in the opening round of the Maui Invitational.

“We’re a good defensive team but the challenge is doing it for 40 minutes,” coach Kelvin Sampson said. “I felt we let go of the rope a little bit in the second half.”

The Cougars (4-0) overwhelmed Butler early, scoring the game's first 17 points while building a 21-point halftime lead. They weren't quite as locked in at either end of the floor to start the second half, allowing the Bulldogs (3-2) to creep back in it before pulling away down the stretch.

Next up for Houston is a spot in Tuesday's semifinals against Wisconsin.

“We won today, but we don’t really gloat on it and stay on it,” said Houston's Jamal Shead, who had eight points. “Just try to move on and get to the next stage, the next round, and focus on Wisconsin.”

Butler had some good moments to start the second half. The rest of it was a bit shaky, thanks to Houston's defense.

Bryce Bolden had 16 points for Butler, which had 20 turnovers that led to 27 Houston points.

“I thought we showed some good fight in the second half that little stretch there, probably eight to 10 minutes where it looked like Butler basketball on both ends of the court,” coach Lavall Jordan said. “We’ve got to figure out a way to get that from the beginning.”

Sampson filled the holes with quality transfers to play alongside a solid returning core. The new-look Cougars have shown they can still D it up: They forced 17 turnovers and held Virginia to 47 points in a 20-point win last week.

They made life even more difficult on Butler.

Houston was locked in defensively from the opening tip, with quick hands filling passing lanes and nimble feet rotating bodies in front of Butler ballhandlers.

The Bulldogs had a hard time getting around or shooting over the long-armed Cougars, repeatedly hoisting up contested shots as the shot clock ticked down. Butler needed 6:21 to hit its first basket and trailed 41-20 at halftime.

“Coming out of the gates, obviously the physicality on the defensive end, that set a tone for the game and had us on our heels,” Jordan said.

Butler threw a stick into the spokes of Houston's well-oiled machine to start the half, flummoxing the Cougars with a more aggressive defense.

The Bulldogs held Houston without a field goal for 5 1/2 minutes, trimming the lead 44-32, but couldn't sustain it. Houston stretched the lead back to 24 and cruised into the semifinals from there.

Houston, which made the Final Four last season, looked like a team that could make another deep March run in the first half. A sloppy second half showed the Cougars still have plenty of work to do.

Butler was able to muck up the game in the second half, but an ugly first half put the Bulldogs in too deep of a hole to make it competitive.

Houston sophomore guard Tramon Mark saw his first action of the season after missing the first three games with a shoulder injury.

Mark was a key reserve in Houston's Final Four run last season, playing about 20 minutes per game while averaging 7.8 points per game. He played 17 minutes against Butler, finishing with five points on 2-of-6 shooting.

“He’ll get better as he goes and so will our team,” Sampson said. “Sometimes less is more. ... The first three games we only played four guards, so tonight just adding him kind of threw everybody’s time off. They’re used to just coming in for each other but now we added another guard.”

Houston plays Wisconsin in the semifinals on Tuesday.