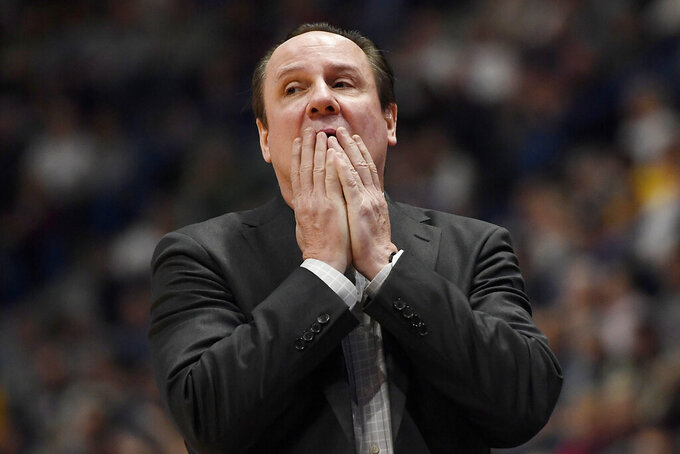 FILE - In this Jan. 12, 2020, file photo, Wichita State head coach Gregg Marshall reacts in the second half of an NCAA college basketball game against Connecticut, in Hartford, Conn. Marshall resigned Tuesday, Nov. 17, 2020, following an investigation into allegations of verbal and physical abuse, ending a tenure that soared to the Final Four and crashed on the eve of the upcoming season. (AP Photo/Jessica Hill, File)

KANSAS CITY, Mo. (AP) — In little more than a week, Wichita State has lost its most successful coach amid allegations of verbal and physical abuse, promoted an assistant with no head coaching experience, brought in a successful ex-SEC coach to help him out and bowed out of a season-opening tournament because of COVID-19.

Talk about living up to the Shockers nickname.

Some of the changes were widely anticipated — the school launched a probe into Gregg Marshall's conduct weeks ago and the results were expected before the start of the season. Other changes came out of nowhere — interim coach Isaac Brown moved quickly to add former Texas A&M coach Billy Kennedy to his staff days before the season was to begin.

“It’s just all been about staying together as a team, as a unit and bringing energy to practice,” Brown said last week, before the Shockers were forced to cancel their appearance at the Crossover Classic in South Dakota because of positive COVID-19 tests within their traveling party. “Just focusing on practice, the game, film, togetherness and doing the right things.”

It was Marshall's alleged failure to do the right things that turned the program upside-down.

The school's winningest coach, who led the Shockers to the Final Four and helped them gain acceptance into the American Athletic Conference, came under came under scrutiny when former player Shaq Morris claimed he’d been struck twice by Marshall during a 2015 practice. Morris also claimed that he’d seen Marshall choke assistant coach Kyle Lindsted, who soon departed to become an assistant at Minnesota. Marshall denied the claims.

Wichita State hired an outside law firm to conduct an internal investigation, and it soon became clear that Marshall was on his way out. He resigned Nov. 17 after agreeing to a settlement of $7.75 million to be paid over the next six years.

There already had been upheaval within the program — high-scoring guards Erik Stevenson and Jamarius Burton joined five other players in transferring to other schools. But the Shockers had time to replenish the roster, bringing in a large class of freshmen and transfers that had Marshall feeling good about a bounce-back season.

There wasn't nearly as much time to adapt to a new coach.

As soon as Brown, who had been on Marshall's staff since 2014, was given the interim tag, the 51-year-old career assistant had about a week to prepare the Shockers for a game against Utah State in Sioux Falls.

They made the trip north earlier this week, only to find out they had returned multiple positive COVID-19 tests, forcing them to turn around and head right back home — in two different groups.

There has still been no word on when the Shockers will open the season. They are supposed to play their first home game against Oral Roberts next Wednesday, then play Missouri in a high-profile non-conference game the following Sunday.

Asked how he felt about taking over the program amid such bizarre circumstances, Brown replied: “It really hasn’t hit me."

Brown should be able to lean on Kennedy's experience.

He won more than 360 games during head-coaching stints at Centenary, Southeast Louisiana, Murray State and Texas A&M, where he twice led the Aggies to the Sweet 16. Kennedy was fired after the 2018-19 season, when his roster was thinned by graduation and injuries and they won just 14 games, and looked as if he'd be out of coaching again this season.

He jumped on the opportunity to join the Shockers when Brown called him late last week.

“I'm excited about the opportunity to be part of a new season at Wichita State," said Kennedy, who was a young assistant coach at Texas A&M in the early 1990s, when Brown spent a season as his point guard. “The chance to work alongside Coach Brown and invest in these young men is a blessing.”

Given all the changes at Wichita State, which has been to the NCAA Tournament seven times since 2012, few people know quite what to expect when the Shockers finally take the floor. But at least in style and effort, Brown promised to showcase a tough, physical offensive and defensive philosophy that has become their trademark over the past decade.

“I think those guys are just bringing it every day in practice with their energy. I think they’re ready to get started,” he said. "I think the fact we had some COVID this summer, they’re just so fired up about getting back in the gym. Our practices have been electric. They’re just ready to play right now.”