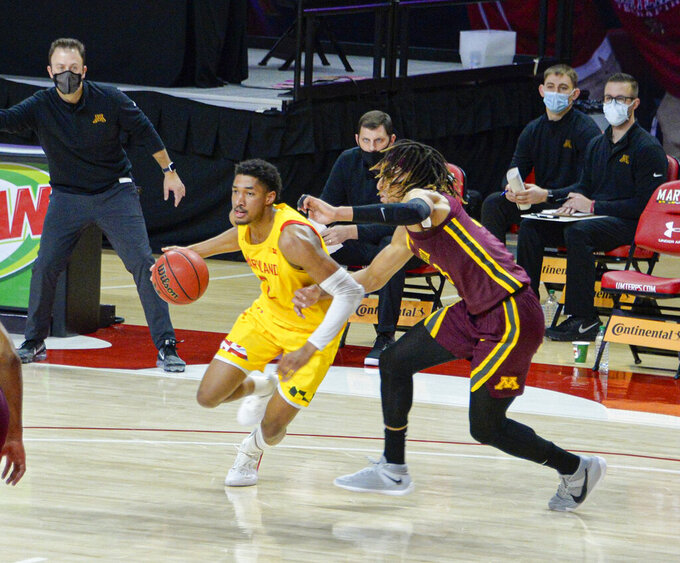 COLLEGE PARK, Md. (AP) — In a welcome change for Maryland, the Terrapins' shots found their mark. The defense did its job on the other end of the court, and an early lead stood up for the entire game.

Then again, those kinds of things usually seem to happen for the Terps when they face Minnesota.

Aaron Wiggins scored 17 points, and Maryland cruised to a 72-59 victory Sunday night for a sweep of the season series.

Four players scored in double figures for the Terrapins, who last month handed the Golden Gophers their only loss at home. Maryland (11-10, 5-9 Big Ten) has won six straight against Minnesota over the last four years.

The Terrapins shot 53%, their best performance in a conference game this season. Maryland also topped the 70-point mark for the first time since tallying 100 in a win over Wingate on Jan. 15.

“When guys make shots it’s a lot more fun, I’ll tell you that," coach Mark Turgeon said. “Tonight we made some open looks, we made some guarded looks."

The defense was just as impressive. Minnesota went 19 for 59 from the floor, missed 20 of 28 attempts from beyond the arc and was outrebounded 37-33.

After trailing by 19 in the first half, the Golden Gophers cut it to 65-59 before Wiggins iced it with a 3-pointer with 2:39 left, just before the shot clock was set to expire.

‘’Got a little tired in the second half," Turgeon acknowledged. “They had a deeper team than we had tonight."

Maryland got off to a blistering start, limiting Minnesota to 1-for-8 shooting while taking a 16-3 lead.

“We were definitely locked in from the jump," Wiggins said. “This entire season, guys have struggled, not been able to hit shots, especially at home in the first half. In this game, we got off to a really good start and were able to maintain that lead."

After Terps forward Galin Smith blocked a shot in the lane by Mashburn and dunked on the other end to make it 20-8, Gophers coach Richard Pitino called a timeout in hopes of shifting the momentum.

An 8-0 run capped by a 3-pointer from Donta Scott put Maryland up 29-10, a surprising performance by a team that had lost four of its previous six games to fall to .500 for the first time all season.

Minnesota trailed 44-28 at halftime after missing 19 of 27 field-goal attempts, being outrebounded 20-13 and having twice as many turnovers as assists (4-2).

The second half was more of the same. After the Golden Gophers closed to 52-40, Jairus Hamilton hit a 3-pointer and Hakim Hart added a three-point play during an 8-2 spurt that made it 60-42 with 10:37 remaining.

Maryland owns a 12-2 record all-time against Minnesota and is 8-2 against the Golden Gophers since joining the Big Ten in 2014. The Terps have won two Big Ten games this season by double-digits — both against Minnesota (63-49 on Jan. 23).

Minnesota: Sure it's tough to win on the road in the Big Ten, but Minnesota's struggle is difficult to rationalize and more than cancels out its strong record at home in league play.

Maryland: If the Terps played this way all season, there would be no question about their worthiness as a potential participant in the NCAA Tournament. Unfortunately for Maryland, this display of sharp shooting and strong defense was anything but typical.

Minnesota: The Golden Gophers remain on the road, facing Indiana for the only time this season on Wednesday night.

Maryland: The Terps host Nebraska on Tuesday night in a makeup of a game postponed from Jan. 16 because of coronavirus issues in the Nebraska program. Maryland then hosts the Cornhuskers again Wednesday night in a game switched from Nebraska.