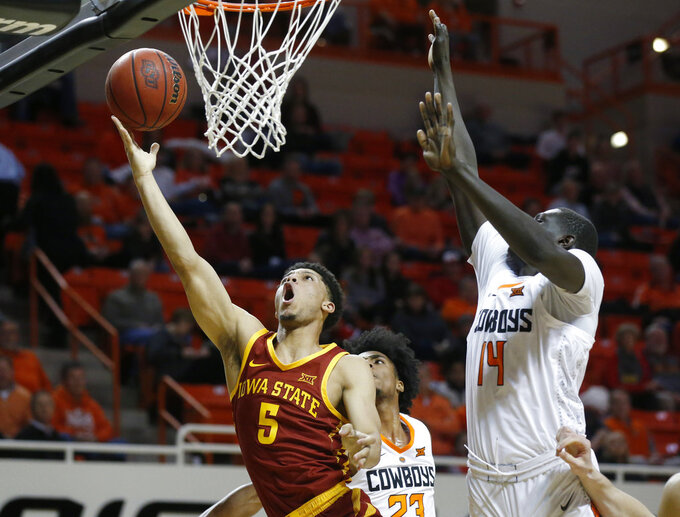 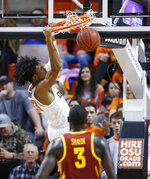 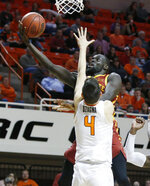 STILLWATER, Okla. (AP) — Lindell Wigginton is still working his way back into the lineup, but is improving each time out.

Wigginton, playing just his second game since missing 10 with a foot injury, scored 17 points and had eight rebounds to help lead Iowa State to a 69-63 victory over Oklahoma State Wednesday night in the Big 12 Conference opener for both teams.

Wigginton had 15 points, four rebounds and three assists in 18 minutes in the Cyclones' 101-53 win over Eastern Illinois in their previous game on Dec. 21, and came off the bench again for 30 minutes. Wigginton was Iowa State's leading scorer last season as a freshman at 16.7 points per game.

Prohm liked his team's overall depth in the victory.

"I thought all of the other guys down the line were great," Prohm said. "I thought this was our most complete game of guys being about each other, from one through 13, regardless of 4 minutes, 1 minute, or 37. That's what it's got to be for this team. Any time you win on the road, it's tough in this league."

Cameron McGriff had 15 points, 13 rebounds, five assists and three steals for Oklahoma State (6-7, 0-1), with Lindy Waters also contributing 15 points and five rebounds. It was McGriff's fourth double-double of the season.

"We got really good performances from Cam, Lindy played really well at both ends of the floor, we just couldn't sustain it long enough to come out with a win over a really good team," said Oklahoma State coach Mike Boynton. "That's what it is every night in this league."

Boynton said he was proud of his young lineup, which features just three players with prior Big 12 experience.

"I thought for all the concerns about not having a bunch of experienced guys playing in this league, we played like a team that had been through games like this. That's why we scheduled the way we did, because I felt like we played like we were prepared for this type of opponent," the second-year coach said.

Two free throws from Michael Weathers capped off an 8-0 Oklahoma State run early in the second half to take its largest lead of the game, 46-43, with 14:21 remaining, but Iowa State answered with a 10-0 run over the next two and a half minutes to regain control. The Cowboys didn't get closer than five points again the rest of the way.

Iowa State: The Cyclones entered the day shooting 49.4 percent from the floor, ranking second in the Big 12, but shot a season-low 36.4 percent (20 for 55) in this one. Iowa State also had three different stretches where they missed four consecutive shots and two where they missed six in a row.

Oklahoma State: There were several occasions when Iowa State jumped out to large leads, but the Cowboys displayed impressive resilience in bouncing back multiple times. After the Cyclones went up 18-6 with 12:17 left in the opening half, Oklahoma State responded with a 10-2 run over the next two-plus minutes. When Iowa State pushed its advantage to 35-27 with 2:36 left in the first half, the Cowboys connected on three consecutive 3-pointers to take a 36-35 lead into halftime. "Good teams are going to make runs," McGriff said. "We have to limit those things, and then it was our time to make our run, and we did well and we got the crowd involved."

While most statistics were close to even on the night, Iowa State dominated in points off of fast breaks, compiling a 22-3 advantage, including 14-0 in the second half.

Iowa State: The Cyclones have a tough challenge as they return home to take on No. 5 Kansas on Saturday afternoon.

Oklahoma State: The Cowboys travel across the state to face their biggest rival, No. 23 Oklahoma.