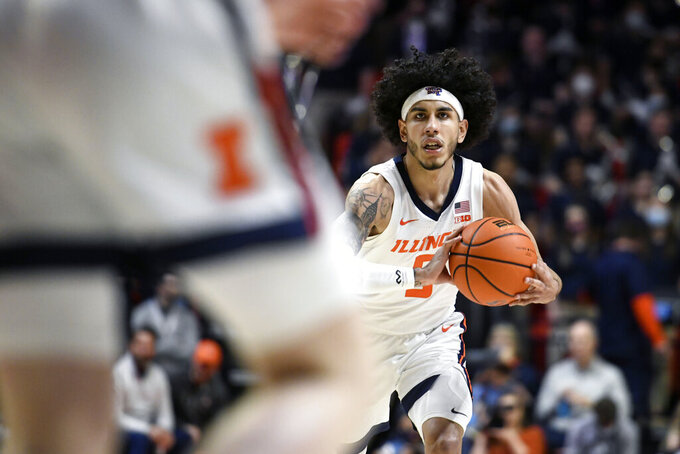 CHAMPAIGN, Ill. (AP) — Da’Monte Williams made four 3-pointers on his way to a season-high 14 points, helping No. 20 Illinois hold off Penn State 60-55 on Thursday night.

The victory kept the Illini (21-8, 14-5 Big Ten) in contention for a share of the conference title if they beat Iowa and Wisconsin loses to Nebraska on Sunday. The Badgers have already clinched at least a share of the Big Ten title, and could win it outright by beating the Cornhuskers.

Williams scored the Illini’s final eight points of the first half, knocking down two 3s and a pair of free throws. Penn State was intent on limiting Alfonso Plummer and Trent Frazier’s looks from distance, and Williams often found himself with open jumpers.

“No, I don’t take that personally,” Williams said. “I haven’t really been shooting the ball well lately, but that still doesn’t stop me from coming in every day and doing my normal routines.”

“I know how tough (Williams) is,” Penn State coach Micah Shrewsberry said. “He makes big shots. He makes big plays. He’s an elite role player. And I’m like daring him to shoot the basketball at home. People make shots at home, but you have to take something away and I thought our guys did it.”

Illinois led for much of the first half, but didn’t hit a shot during the last 4:24 of the first half — while Penn State hit four of its final five shots of the period to take a 30-29 lead into the break.

Illinois took a 46-41 lead after Andre Curbelo found Cockburn open for a dunk off an inbounds pass, then Frazier stole the ball from Sam Sessoms and sprung Jacob Grandison for a layup with 9:21 left.

Penn State hit its next four shots, including back-to-back scores from John Harrar, to tie the game at 49. A 3-pointer from Dallion Johnson briefly lifted Penn State into the lead before Grandison hit a corner 3 at the 4:34 mark that put Illinois ahead for good.

The Nittany Lions missed 10 of their last 11 shots, including a 3 from Myles Dread that would’ve tied it at 55 with 41 seconds to go. Illinois made five of six free throws in the final minute to close out the win.

“You’ve got to take what you can get in a 55-possession game,” Illinois coach Brad Underwood said. “Told (the team) afterwards there will be about three or four games like this in the NCAA Tournament.”

Penn State: The Nittany Lions have shown plenty of mettle in Shrewsberry’s first year as coach, notching impressive wins over Iowa and Michigan State. But they lack the firepower to hang with the Big Ten’s top teams, ranking dead-last in the conference in scoring.

Illinois: On a poor shooting night, Illinois got just enough from its veterans, proving it can win ugly when Cockburn isn’t as influential as usual. Holding Penn State to a 3-of-14 clip from 3-point range in the second half was a big help.

Penn State: At Rutgers on Sunday.