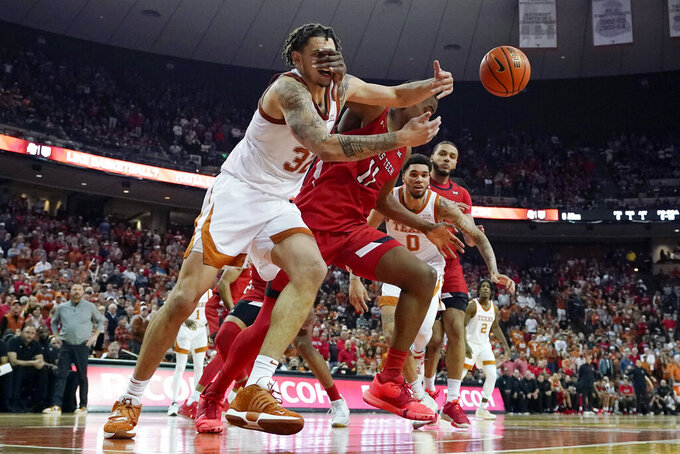 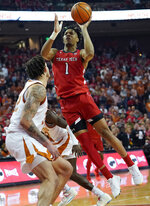 They lustily booed “The Eyes of Texas” song from the rafters. They chanted “De-fense” on every crucial possession. They howled when the Longhorns launched a late air ball.

And then the No. 11 Red Raiders players strutted out of the building with a 61-55 win Saturday, made all the sweeter given how this old rivalry that once sat on a low simmer has boiled over this season.

Bryson Williams scored 17 points and Texas Tech held off a late charge by the No. 20 Longhorns to get the victory and sweep the regular-season series.

The win earned the Red Raiders (21-6, 10-4 Big 12) and their fans another hearty jab against Texas coach Chris Beard, who led Texas Tech for five years and took them to the brink of a national championship in 2019, only to leave for his alma mater this season.

Beard's bolt from a campus that had embraced him left hard feelings in Lubbock, and the Red Raiders fans in the building loudly booed whenever his face appeared on the arena video board.

“With all the respect I got for them, that was personal,” said Red Raiders guard Clarence Nadolny, who scored 14 points. "You don't want to lose to the guy that left you."

Texas Tech led by 10 with just over 3 minutes to play before Texas closed to within 56-55 after a 9-0 run. But Andrew Jones' long 3-pointer with with 1:10 to play was the last Texas basket of the game, and Texas Tech put it away from the free throw line.

Texas Tech has won nine of the last 11 over the Longhorns and outmuscled one of the best defensive teams in the country to get this one. The Red Raiders outscored the Longhorns 26-10 in the paint and won the rebounding battle 45-36. Texas also shot just 28%.

“They don’t hand the trophy out in February. They do that in April. It’s a hurt locker room right now, but we’ll be back," Beard said.

The game was physical from the opening tip as elbows flew, bodies hit the floor and Texas was hit with an early flagrant foul. Longhorns forward Dylan Disu took an elbow to the nose and left the court holding a towel over his face late in the first half but later returned..

Texas Tech twice built the lead to seven early in the second half only to see Texas claw back with 3-pointers from Jones and Jase Febres.

A 3-pointer from Febres had the Longhorns within three before Nodalny answered with one on the other end. Free throws from Williams and Nadolny pushed the Red Raiders’ lead to 56-46 with just over 3 minutes to play before Texas rallied.

“Our teams are very physical, they play tough and it was a war out there," Tech coach Mark Adams said. “This game was possession by possession.”

Texas Tech has its share of fans living in the Austin area, but many surely made the drive, and it's not one for a Sunday. The Tech campus is 375 miles and a 5-hour, 45-minute drive from Texas’ home arena.

Texas Tech: The Red Raiders were able to produce their strong turnout to the chagrin of Texas school officials. Texas stopped ticket sales Thursday after learning a group of Red Raiders fans were reportedly buying as many as possible through the school box office using a specific online code for Longhorns buyers.

“It didn’t feel like a road game, seeing that sea of red,” Adams said.

Texas: The Longhorns played their second game without forward Tre Mitchell, who earlier in the week took what Texas called a leave of absence for personal reasons. Mitchell, a transfer from UMass, started 17 games this season and was averaging 8.7 points and four rebounds. The school has given no indication whether he's expected to return.

Texas got next to nothing offensively from some of its most dependable scorers. Forward Timmy Allen had six points and two rebounds. Guard Marcus Carr was scoreless on six shots in 33 minutes, and had just two assists against four turnovers ... Texas' 16 offensive rebounds nearly matched Tech's 17. But the Longhorns scored just six second-chance points to 15 for the Red Raiders.

Texas Tech missed started 3 of 8 from the free throw line, then made 12 in a row and finished 20 of 29. Texas got into the shooting bonus with more than 9 minutes to play. But the Longhorns wouldn't get to the line again until down by 10 with 2:44 left.