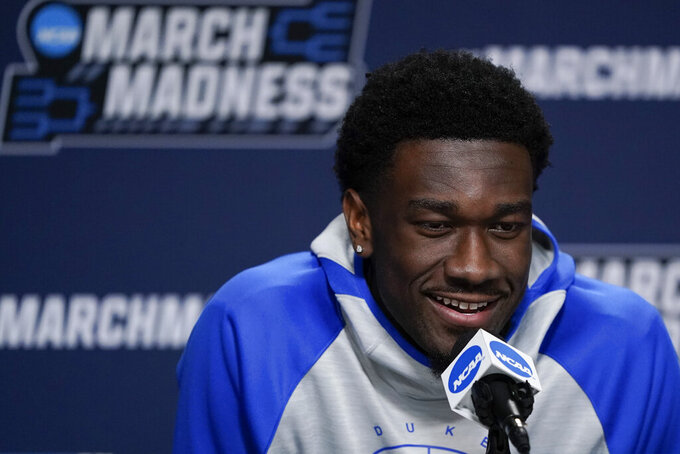 Duke center Mark Williams speaks during a news conference on Saturday, March 19, 2022, in Greenville, S.C. Michigan State will face Duke in a second round game of the NCAA college basketball tournament on Sunday. (AP Photo/Chris Carlson) 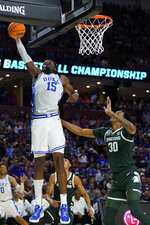 If a Duke player makes a defensive mistake, there's a good chance Mark Williams is there to clean it up.

The sophomore is elite rim protector and solid rebounder with the spring to finish around the rim. He's vital to the Blue Devils' defense entering the NCAA Tournament's Sweet 16, and his developing offensive game could help improve his NBA chances, too.

The performance against the Spartans had retiring Hall of Famer Mike Krzyzewski saying Williams looked like he was playing a sport other than basketball.

“Mark looked like a hockey goalie the whole night, trying to protect our net,” Krzyzewski said. “He did it enough to win the game.”

That included one of his blocks during crunch time against the Spartans when he didn't bite on A.J. Hoggard's pump fake, blocked the shot with his left hand, then used that same hand to pluck it out of the air with about 2:15 left. Duke went on to score the go-ahead basket seconds later, part of a game-ending 20-6 run.

STRENGTHS: It starts with defense, where Williams has the length to alter far more shots than he actually blocks. But Williams pointed to his focus on making the “winning play” moreso than being fixated on swatting a shot when making a play like the one against Hoggard.

Krzyzewski said Williams' ability to move laterally has increased “tremendously,” which has helped him stay on the court against smaller teams and show a better ability to handle switches and ballscreens, though he still has room to grow there, too.

“His feet are wider," Krzyzewski said. "That's why he can stay in front, just keeping down.”

WEAKNESSES: He has always had the athleticism to finish on putbacks or lobs for dunks, but the rest of his offensive game is still in development.

Williams has added some back-to-the basket improvements such as a short hook shot and even a stepback jumper he hit with the shot clock winding down in the first half against the Spartans. But it's unclear what type of offensive skillset he could rely on at the next level or how much range he might have to pull out a defender.

Other prospects still playing in the NCAA Tournament:

Hunter Dickinson, Michigan. The 7-1, 260-pound sophomore has had a strong two-game start to the NCAAs, averaging 24 points and 8.5 rebounds on 69.6% shooting. Dickinson is a possible second-round prospect with a throwback game that makes his fit unclear for the NBA, though the big man made three 3s in the second-round win against Tennessee and has hit 21 on the season to show some range.

Jaden Ivey, Purdue. The 6-4, 195 pound sophomore has been a high lottery prospect all year. Now The Associated Press second-team All-American has everyone's attention as he tries to get the Boilermakers to their first Final Four since 1980. He's currently the fourth-ranked prospect by ESPN and No. 3 on draft analyst Chad Ford's most recent Big Board ranking.

Bennedict Mathurin, Arizona. The 6-6, 210-pound sophomore and AP third-team All-American helped the Wildcats avoid an overtime upset against TCU by scoring 30 points, including the OT-forcing 3-pointer and six points in the extra period. Mathurin is a lottery prospect ranked 12th overall by ESPN.