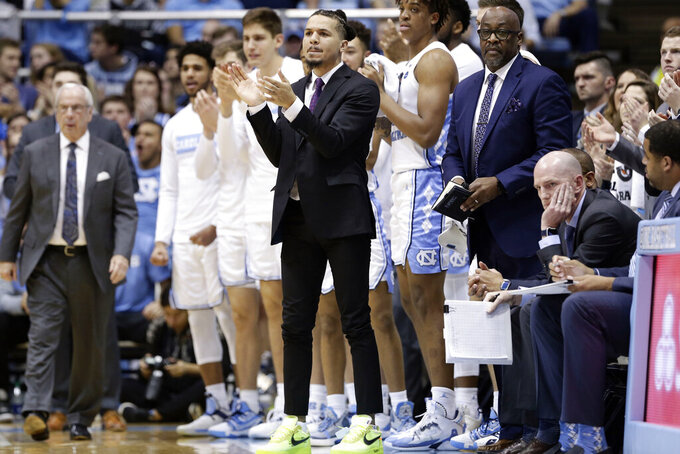 North Carolina guard Cole Anthony (2) reacts from the sidelines with an injury during the first half of an NCAA college basketball game against Yale in Chapel Hill, N.C., Monday, Dec. 30, 2019. (AP Photo/Gerry Broome)

CHAPEL HILL, N.C. (AP) — The losses are adding up for North Carolina, along with the sleepless nights for Hall of Fame coach Roy Williams.

The Tar Heels have their worst record through 15 games in 17 seasons under Williams. They’ve struggled to replace veteran and NBA talent from a team that earned a No. 1 seed in last year’s NCAA Tournament. And the roster left behind has been hit hard by injuries, notably with potential one-and-done prospect Cole Anthony roughly midway through a multi-week timeline to return from knee surgery.

It has already left the Tar Heels with a major climb ahead to earn a bid to the NCAA Tournament, not to mention the fact they look as vulnerable as they ever have for Clemson to end its 0-for-forever streak in Chapel Hill on Saturday.

It all has Williams – who said on his radio show earlier this week that it is the “least gifted” team he’s had since taking over at UNC – staying up late looking at statsheets, planning practices or reviewing scouting reports searching for a way to stop UNC's struggles.

“I’ve never been one to sleep. I’m not sleeping at all now,” Williams said Friday. “That’s the only difference.

“The only thing is when you’re winning it’s easier to finally go to sleep. A normal night for me is 4 ½ to five hours. Now it’s nowhere close to that.”

They’re coming off home losses to Georgia Tech and Pittsburgh, both picked to finish in the bottom third of the ACC. Now they’re hosting the Tigers (7-7, 1-3), who are 0-59 in Chapel Hill to give UNC the longest home winning streak against a single opponent in NCAA history.

Even the 2002 team that went 8-20 under Matt Doherty kept that streak alive, and by a double-figure margin, too.

“I’ve said the same thing for 17 years … that it’s a streak that people talk about, you have nothing to do with it, it’s going to end at some time, let’s try to put it off another year,” Williams said.

It was clear the Tar Heels would have a very different look after losing their top five scorers from last year – three as NBA first-round picks -- while complementary players Garrison Brooks and Brandon Robinson took leading roles.

Anthony’s arrival at the point along with fellow McDonald’s All-American big man Armando Bacot offered optimism, but Anthony has been out since mid-December as the Tar Heels’ top scorer (19.2) and the lone player consistently able to create his own shot.

“Obviously I would say the losing is probably the biggest weight on us because we’re North Carolina and they’re going to roll the ball out regardless of who’s out on the floor,” Bacot said. “And we’re going to have to go out there and play and compete anyways.”

North Carolina’s struggles have also led to a awkward wait for Williams to break a tie with late mentor Dean Smith for fourth on the Division I men’s coaching career wins list by claiming his 880th win.

Williams recalled a years-ago message from Smith that seemed fitting now as Williams tries to solve the Tar Heels' struggles.

“He said, ‘My biggest worry about you is how hard you take the losses as an an assistant, and it’s a lot worse as the head coach,’” Williams said. “And he’s right again. It’s a lot worse.”