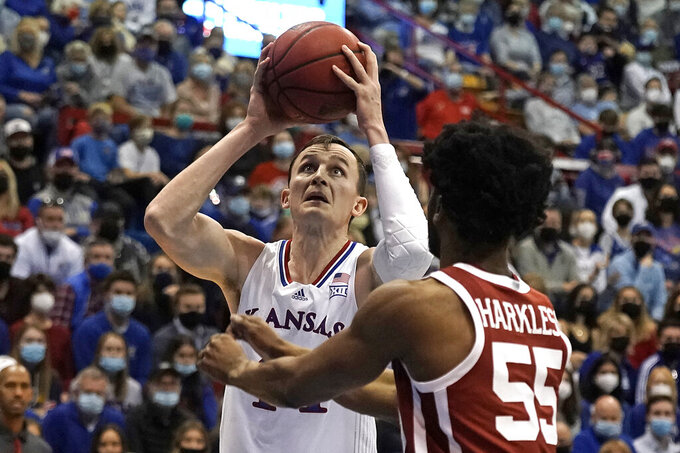 Kansas used a 15-2 run late in the game to come back from a deficit and take the game's largest lead. The Sooners trimmed it to 70-69 before Wilson hit a free throw. Jordan Goldwire’s jumper in the final seconds caromed away.

Neither team got much production from its bench. Oklahoma had eight bench points, while Kansas had just three.

Kansas finally got hot in the second half. A 6-0 run capped by a David McCormack baseline hook at 14:23 gave the Jayhawks a 46-45 edge, their first lead since 11-9. Oklahoma pulled away again by five points, but Zach Clemence hit a 3-pointer with 7:01 left to give Kansas the lead. Those were the only points off the Kansas bench.

Braun’s basket moments later gave Kansas a three-point lead. Agbaji hit the front end of a one-and-one and Braun hit a layup late in the shot clock, capping an 11-0 run and giving the Jayhawks their largest lead at 63-57 with 3:50 left. Oklahoma went nearly 7 minutes without scoring.

Oklahoma: The Sooners had trouble with Kansas’ size. The Sooners were outrebounded 32-26.

Kansas: The Jayhawks maintained their half-game lead over Baylor at the top of the Big 12.