WIN-throp: Eagles flying off the radar with 20 wins in a row 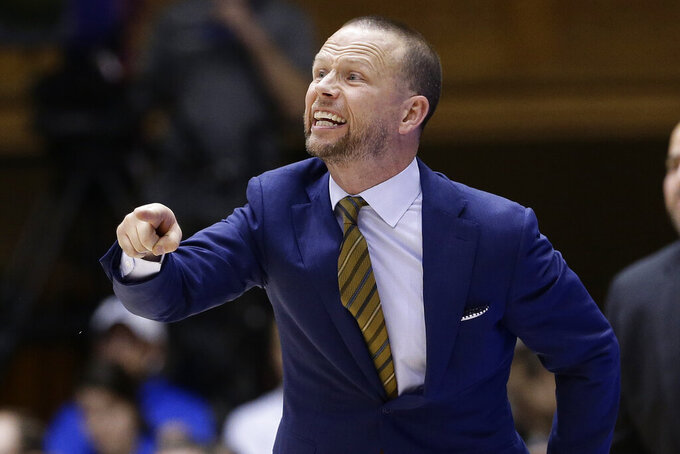 FILE - In this Nov. 29, 2019, file photo, Winthrop head coach Pat Kelsey directs his team during the second half of an NCAA college basketball game against Duke in Durham, N.C. Winthrop has Division I's best record in men's basketball yet the Eagles continue to soar off anyone's national radar. The unranked Eagles have won all 15 games this season and have the longest win streak at 20.(AP Photo/Gerry Broome, File)

Winthrop guard Chandler Vaudrin can't understand how the undefeated and unranked Eagles don't seem to be on anyone's national radar.

But the 6-foot-7 guard knows the remedy, however — just keep winning.

The Eagles have won more games than No. 1 Gonzaga and No. 2 Baylor, both 14-0. They've won a best-in-the-nation 20 straight games in Division I men's basketball dating back to their Big South Conference Tournament title and NCAA Tournament berth last season.

Yet, Winthrop remains on the outside of the rankings and much of college basketball's consciousness in this pandemic-affected season.

“We can only play who we can play,” Winthrop coach Pat Kelsey said. “We tried to schedule every Power Five under the sun. It's hard to do and the ones we did got canceled.”

The Eagles completed a back-to-back sweep of Big South rival Presbyterian this week and don't play again until they host UNC Asheville on Jan. 28-29.

Despite their lack of signature wins, Kelsey believes the Eagles belong in the NCAA Tournament discussion because of their chemistry, depth and resolve.

“We pass the eye test,” he said with conviction. “We're a tough, tenacious, connected team that's a veteran team and has elite players, too.”

Vaundrin transferred from Division II Walsh College when many in his circle told him he was wasting his time trying to play in the sport's top level. Instead, the senior from Uniontown, Ohio leads the Eagles in scoring, rebounding, assists and steals.

“I always bet on myself,” he said.

Winthrop's success this season was forged a year ago after it cut down the nets as the Big South Tournament champions with a ticket to the NCAAs in hand.

Then came the pandemic shutdown and the Eagles were left disappointed and with so many questions going forward.

Vaundrin came to Winthrop because of its past success at reaching the NCAAs — the Eagles have made 10 NCAA appearances since 1999 — and was naturally upset circumstances cost him an opportunity on basketball's grandest stage.

Soon after, Vaudrin knew his only response was using last year as motivation. His teammates were on the same page and pledged to be ready no matter what the season would look like.

“We felt like there was a chance (the virus) might've overshadowed one of the best teams we've ever had in Rock Hill,” athletic director Ken Halpin said. It hasn't "because of the resolve of the team.”

Kelsey has helped shaped that, too.

The 45-year-old from Cincinnati has had several noteworthy moments in his basketball career. He was a captain for Xavier. Kelsey was a member of Skip Prosser's staff and was in the building years later as a Wake Forest assistant watching paramedics trying to revive Prosser the day he died of a heart attack in 2007.

The grief lingered so much that Kelsey said it made him step away as Xavier's associate head coach in 2011, undergoing therapy before rediscovering his passion for coaching.

Kelsey, hired by Winthrop in 2012, made headlines after a heartfelt postgame plea following a loss at Ohio State about the Newtown, Connecticut shooting at Sandy Hook elementary school where 26 people, including 20 children, were killed.

“Parents, teachers, rabbis, priests, coaches, everybody needs to step up. This has to be a time for change," Kelsey said then with tears in his eyes.

It's passion Kelsey's players and Winthrop leaders say he still carries with him today.

Kelsey led the Eagles to the NCAAs in 2017 where they lost to No. 4 seed Butler, 76-64. He hopes this year's group catches the eyes of the NCAA Tournament committee. To do that, Kelsey said he and his team will stay their course toward capturing another Big South crown and securing an automatic bid to the NCAA Tournament.

The coach said Prosser always told him, embrace the now, not what might be down the road and that's what he is doing as he soaks in each minute of the landmark season, no matter where it takes the Eagles.

“I'm as happy as I've ever been in coaching because it's a joy to coach these guys,” Kelsey said. “It truly is.”