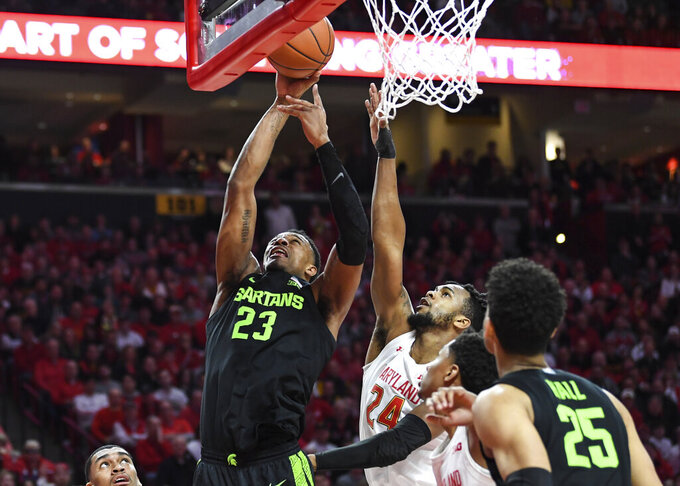 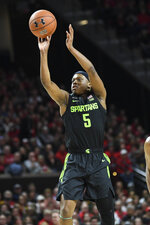 COLLEGE PARK, Md. (AP) — Tom Izzo certainly got Michigan State in the proper frame of mind, and he should be commended for devising a game plan good enough to deny Maryland a chance to clinch first place in the Big Ten.

The long-time Spartans coach also laughingly took credit for the shot of the game, a buzzer-beating heave by Cassius Winston from well behind midcourt that capped a strong first half and propelled the Spartans past the Terrapins 78-66 on Saturday night.

The Spartans (20-9, 12-6) bolted to a 17-5 lead and never trailed in dealing Maryland its first home loss of the season. When the teams played two weeks earlier, the Terps scored the game's final 14 points to pull out a 67-60 victory.

There would be no comeback in this one. Winston's desperation heave from around 60 feet out put Michigan State ahead 40-29, and the Spartans upped the margin to 18 points before churning out the final minutes of their third straight win.

“I didn't know I was going to make it, of course. But I tried," Winston said. “I focused in. I said, 'I'm going to get this up. Try to give it the best chance.' And splashed on that."

Winston finished with 20 points in nearly 38 minutes of play. He went 5 for 6 beyond the arc and had six assists, which more than overshadowed his seven turnovers.

”We're getting towards the end of the season, it's crunch time, and we wanted to come in and play hard. We're not afraid of anything," Winston said. “We feel like we can play with any team in the conference, any team in the country."

After Maryland (23-6, 13-5) closed to 71-61 with 5:20 left, the sellout crowd hoped to see another rally from a team that three times has overcome a halftime deficit of 14 points or more. But a three-point play by Winston made it 76-61, leaving the Terps and their fans with little hope of ending the night in a celebratory mood.

“It wasn't our night," Maryland coach Mark Turgeon said. “We tried hard. We maybe tried too hard. Our guys know what's at stake, and it's a lot on a team."

Bidding for their first Big Ten crown since joining the league in 2014, the Terrapins stumbled at the outset and never showed the form that enabled them to win 10 of 11 and climb to the top of the standings.

The Terps' lead over second-place Michigan State was slashed to one game with two to play. Illinois, Wisconsin, Penn State and Iowa are also in the running.

Jalen Smith had 20 points and 12 rebounds for Maryland, now 15-1 at home. The Terps can still clinch at least a share of the league title with a victory at Rutgers on Tuesday.

Xavier Tillman had 14 points and 12 rebounds for the Spartans and Malik Hall scored 16 on 5-for-5 shooting from the floor.

Before the game, Izzo told his players, “If you just play for yourself, it's not rewarding."

He asked them to pick someone, anyone, to play for. His suggestions included Winston, a senior whose brother died in November.

“We all know Cassius has been through a lot this year," Izzo said. “I told our guys, 'Play for him.' Play for the seniors."'

Winston's half-ending toss from the right side hit nothing but net. It capped a 17-6 surge to end the half and provided Michigan State with a lead that, for a change, Maryland was unable to overcome.

The enthusiastic crowd was buzzing at the opening tip, but it would be a while before they had anything to cheer about. Michigan State scored the game's first nine points and led 17-5 after making seven of its first eight shots.

Maryland responded with a 13-2 run and pulled even at 23 before the Spartans held the Terps scoreless for the next seven minutes.

Michigan State: Ranked No. 1 in the nation during the preseason, the Spartans have bounced back smartly after falling out of the Top 25 in February. Michigan State has won four of its last six road games and should be moving up in the poll next week.

Maryland: The Terrapins still have the inside track at winning the conference and earning a top seed in the Big Ten Tournament, but this loss shows they're not unbeatable at home and that not every deficit can be overcome.

Maryland: At Rutgers on Tuesday night.