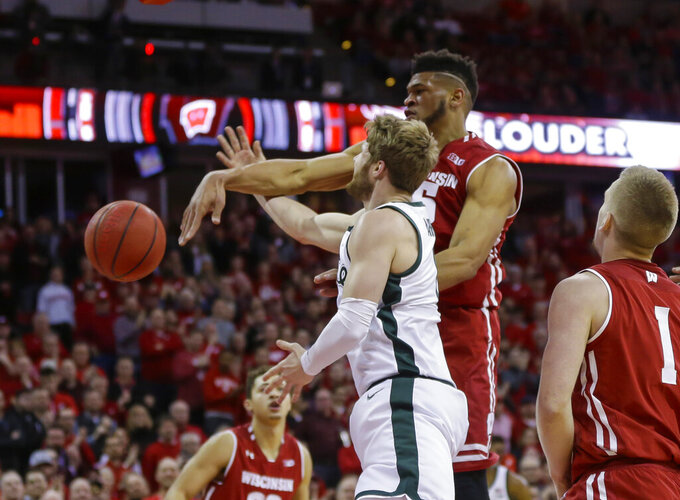 Wisconsin's Charles Thomas (15) blocks a a shot by Michigan States's Kyle Ahrens (0) during the first half of an NCAA college basketball game Tuesday, Feb. 12, 2019, in Madison, Wis. (AP Photo/Andy Manis) 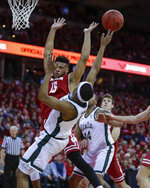 Izzo said it wasn't just Winston's effort on the offensive end that was key Tuesday, saying his point guard's ability to lock down shooters on the outside ensure the Spartans didn't have to stretch their defense, which would have helped open up the inside.

"The ball is in his hands, I trust it," Izzo said of Winston. "He made a couple of big, big plays tonight, that's for sure."

At times, the game seemed like a contest between the two heavyweights as Winston regularly answered Happ hook shots with a floater or 3-pointer.

But Wisconsin (17-7, 9-4) staggered down the stretch, going more than five minutes without a point as the Spartans put the game away.

"The whole night, we were throwing punches back and forth," Happ said. "We felt we were in position to win the whole time."

The game was still in doubt with 32 seconds to go before Kenny Goins hit a 3-pointer to give the Spartans a 62-56 lead. Wisconsin was then forced to foul, and Davison finally broke the Badgers' scoreless streak making a 3-pointer with 10 seconds left.

Goins and Nick Ward each added 12 points for the Spartans, while Wisconsin's Nate Reuvers was the only other player in double figures for scoring at 11.

As dominant as Happ was at times, he accounted for six of the Badgers' 10 turnovers. He also missed all six free throw attempts he took, including two with the Badgers down 59-56 and 1:28 left.

The struggles at the free throw line have become a recurring theme for Happ this season. He's now shooting less than 45 percent from the foul line, and was 1 for 7 in a 59-52 loss to Minnesota in early January.

"It's not the lack of every feasible resource available as he's worked on things," said Wisconsin coach Greg Gard. "You gotta continue to chip away and hope there's a breakthrown, continue to work with him. The biggest thing is you support him. He does so many good things for us."

HAPP ON THE RISE

Happ's 20 points put him at 2,000 for his career as he became the fourth player in the Big Ten -- and the first in more than 35 years -- to hit that mark and grab 1,000 rebounds. He also took over solo third place on Wisconsin's all-time assists list on the Badgers' first basket of the night as he found Nate Reuvers on the perimeter for a 3-pointer.

The referees went to the monitors twice for reviews, issuing a flagrant one on Michigan State's Matt McQuaid the first half and deciding there was nothing more than a common foul on the second. In the first half, McQuaid held Brevin Pritzl by the jersey as the guard went up in the lane to pull in a pass. McQuaid let go as Pritzl went up for the shot, which he missed. Following the review, Pritzl got two free throws, both of which he hit, and Wisconsin got the ball, which resulted in a Pritzl 3. The referees went to the monitors again as Davison and McQuaid jostled in the block and then Davison went around McQuaid for a missed layup with 5:21 left. After review, the referees decided there was no hook and hold on Davison, who hit 1 of 2 from the line for the common foul on McQuaid. It would be the last Badgers point until Davison's 3 with 10 seconds left.

Michigan State: The Spartans, who had lost three in a row to start February, have now won back-to-back games.

Wisconsin: The Badgers, who had their six-game winning streak snapped on Saturday by Michigan, missed out on a chance to keep pace with the conference leaders.