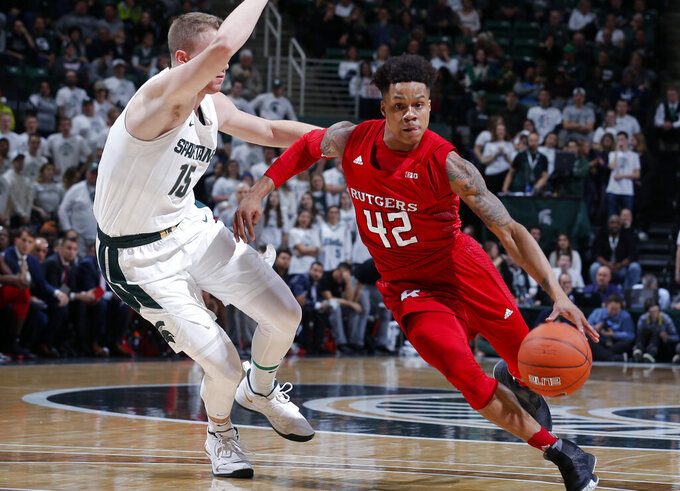 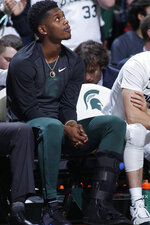 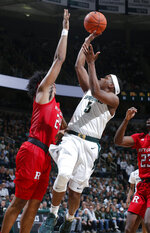 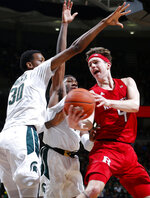 Cassius Winston had 23 points and seven assists, helping the Spartans top the Scarlet Knights 77-65 on Sunday night in the Big Ten opener for both teams.

“It was almost good for us have to grind one out because we're going to have to do that for a while until we get back on track," Izzo said.

Michigan State (6-3) led by just two points midway through the second half before outscoring the Scarlet Knights 16-7 to take control of what was a closely contested game for much of the night.

“It's tougher in conference play," Spartans shooting guard Gabe Brown said. “A lot of those Rutgers players got better.”

Brown scored a season-high 14 points, starting in place of Rocket Watts, who is expected to be out for about a week with a leg injury.

“Missing Rocket, that's another key player who can spread the floor and create," Winston said. “It's a little tougher without him, but Gabe came in and did some good things."

Michigan State's Xavier Tillman had 14 points and 10 rebounds while Aaron Henry added 12 points on 2 of 10 shooting from the field and 7 of 8 at the line.

The Scarlet Knights (6-3) were competitive despite their leading scorers struggling to make shots. Ron Harper Jr. scored nine points on 4 of 12 shooting and Geo Baker had just four points on 1 of 7 shooting. Both players entered the game averaging 13 points as the team's only double-digit scorers.

“Geo is going to have nights like this because he's a good player and teams are going to key in on him,” coach Steve Pikiell said.

“I love my bench," Pikiell said.

Michigan State held the Scarlet Knights to 40 percent shooting and had a 40-32 edge in rebounds.

The Spartans shot 43.6% overall and made just 7 of 21 3-pointers, failing to find a groove on offense after looking lost with the ball in an 87-75 loss against No. 10 Duke on Tuesday night.

Michigan State made up for its outside shooting woes by getting to the basket and drawing fouls, leading to its making 22 of 27 at the line.

“There's only one way we could have won that game and that was to get to the line, make your free throws,” Izzo said. “And, rebound the daylights out of the ball."

Rutgers: Pikiell potentially has his best team in his fourth season with the Scarlet Knights, who haven't had a winning record since the 2005-06 season in coach Gary Waters' last year. “I’m excited about our future," Pikiell said. Rutgers doesn't have much depth in the post, but perimeter play and defensive intensity should help it pull off some upsets. The Scarlet Knights entered the game third in the Big Ten in blocks, steals and turnovers forced and showed Michigan State those statistics were legitimate. “They were putting pressure on us the whole game,” Izzo said.

Michigan State: The top-ranked team in the preseason is in a funk. “We're just going to inch forward, closer and closer, to try and get back,” Izzo said. "The Spartans don't appear to be having much fun during and away from games because they're still reeling from the death of Winston's brother a month ago. They also have not made up for the loss of injured senior Joshua Langford or a trio of key players from last year's team: Matt McQuaid, Kenny Goins and Nick Ward.

Michigan State might plummet in the poll on Monday after being dominated by Duke at home in a game that wasn't as close as the score indicated and struggling for much of the game against the Scarlet Knights.