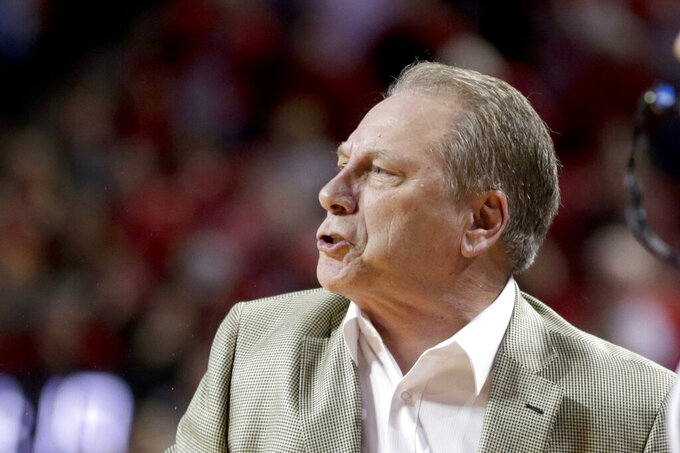 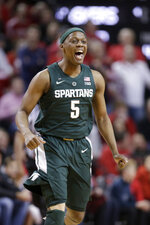 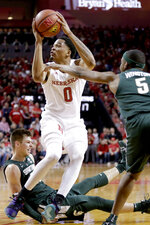 Winston scored a career-high 29 points to go over 1,000 for his career, had six assists and played tough defense on Glynn Watson Jr. while leading No. 6 Michigan State past Nebraska 70-64 on Thursday night.

"I told him before the game, 'You're going to get measured on how you bounce back,' " Izzo said.

Winston more than passed the test.

"Cassius, the way he ran that whole thing, he was like a quarterback dissecting a defense," Izzo said.

In a win at Penn State on Sunday, Winston had seven turnovers, and his 11 points were his fewest since Florida held him to 10 on Dec. 8. Izzo told reporters it was one of the worst games Winston had played in his three seasons.

Of the Spartans' first 18 field goals against Nebraska, Winston scored eight of them and had assists on five others. He held Watson, the Huskers' hottest player the last week, to 3-of-13 shooting from the field and eight points.

Izzo's criticism motivated him, he said.

"Just get back on track, playing at the level I was playing at," Winston said. "I want to play at the highest standard, my best ability. I've got to do that for this team and put us in the best situation."

Nick Ward added 15 points and 10 rebounds for his second straight double-double. He also made his first 3-pointer of the season and second of his career.

"That should keep him happy for a week or 10 days," Izzo said.

The Spartans led by 12 points in the final 2 minutes, but Nebraska cut the lead to four twice before Matt McQuaid made a pair of free throws for his first points with 14.2 seconds to put the game away.

"I wasn't very pleased with our offense in any way, shape or form," Nebraska coach Tim Miles said.

James Palmer, who led Nebraska with 24 points, struggled mightily from the field, going 6 of 21, but he made all 11 of his free throws.

"Palmer's a good player, and I feel like I did a pretty good job on him," McQuaid said. "I just tried to do what I could. He's a bigger, more physical guard. I tried to get a couple charges, but things weren't going my way. So I had to figure out different ways to guard him."

Nebraska had hoped to build off its win at No. 25 Indiana on Monday night but couldn't get going. The Huskers were trying for their first win over a top-10 opponent in nine tries.

"You need to build and play from the front against these teams," Miles said.

He found no consolation in playing the Spartans close for most of the game, which had 11 lead changes and six ties.

"There are no moral victories," Miles said. "I'm utterly mad and disappointed."

Michigan State: This was a gut-check win for the Spartans, who were without Joshua Langford (ankle) for a fifth straight game and Kyle Ahrens (back) for a second in a row.

Nebraska: The Huskers were feeling pretty good about themselves after an impressive win at No. 25 Indiana on Monday, and they had an amped standing-room crowd on hand. But they could never find rhythm until it was too late against the nation's No. 3 team in field-goal defense.

"We were paranoid of this game. They didn't make shots tonight. Those things happen sometimes. Tim's got a great team that's going to be an NCAA Tournament team, and I hope they keep on winning now." — Izzo.