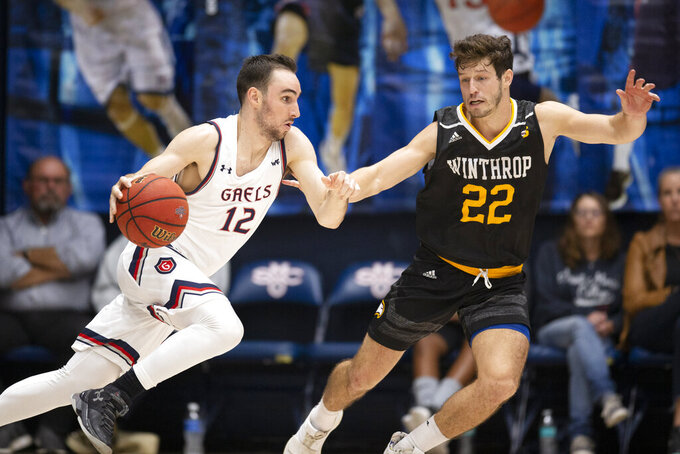 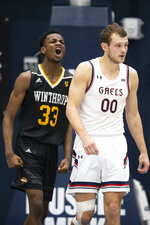 MORAGA, Calif. (AP) — Saint Mary's star Jordan Ford missed a layin with 1 second left and Winthrop pulled off a 61-59 upset of the No. 18 Gaels a night after losing on a buzzer beater.

Chandler Vaudrin had 19 points, five rebounds and four assists off the bench for Winthrop (2-1), the Big South Conference School from Rock Hill, South Carolina. The Eagles lost 77-74 at Fresno State on Sunday before traveling to the Bay Area to take on West Coast Conference power Saint Mary's.

Winthrop's jubilant players danced through the hallways of McKeon Pavilion celebrating on the way to the locker room after stunning the Gaels.

Ford had converted a layin with 10 seconds left to pull Saint Mary's within 61-59. Saint Mary's Elijah Thomas quickly fouled Russell Jones, who missed the front end of a 1-and-1 free throw opportunity and the Gaels secured the rebound to give themselves one more chance.

"I think we have pretty good players and we are pretty good defensively," Saint Mary's coach Randy Bennett said. "We just have to figure out the right pieces to put together, trust each other and share the ball."

Jamal King made a 3-pointer early in the second half to put Winthrop ahead 31-28 then the Eagles followed with a key 8-0 run.

The teams were even on the boards with 31 each and both had 15 turnovers.

Winthrop: The Eagles had never played in the state of California before the Sunday-Monday back-to-back. They began the season with four straight road games and will finally play their home opener Saturday against Mid-Atlantic Christian.