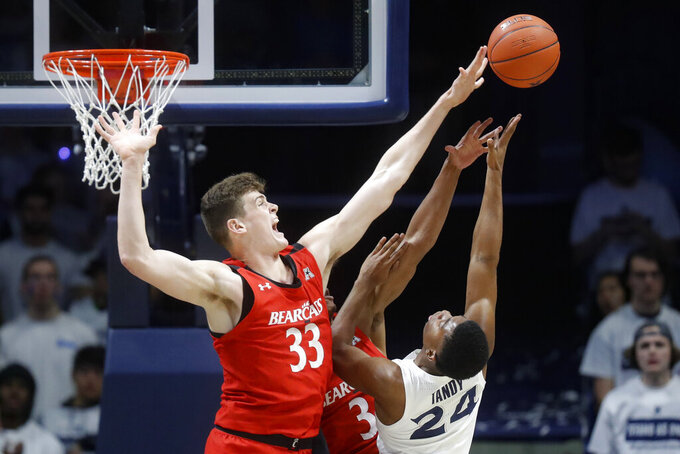 FILE - In this Dec. 7, 2019, file photo, Cincinnati's Chris Vogt (33) blocks a shot by Xavier's KyKy Tandy (24) during the first half of an NCAA college basketball game in Cincinnati. Wisconsin has announced the addition of 7-foot-1 center and Cincinnati transfer Chris Vogt Vogt started 50 games at Cincinnati. He averaged 5 points, 3.5 rebounds and 1.1 blocks and 19.4 minutes last season. (AP Photo/John Minchillo, File)

Vogt started 50 games at Cincinnati. He averaged 5 points, 3.5 rebounds and 1.1 blocks and 19.4 minutes last season, all drops from the previous season.

“Chris brings depth to our frontcourt, he’s played at a high level, and he has four years of experience under his belt” Wisconsin coach Greg Gard said in a statement. “The fit also aligned well academically for Chris here at Wisconsin."

Wisconsin will be Vogt’s third college. He spent two seasons at Northern Kentucky before transferring to Cincinnati.

“I think that Wisconsin was the best fit for me, both on and off the court,” Vogt said in a statement. “I fit very well into this program’s style of play and Wisconsin is a very good school to get an MBA from.”

Wisconsin’s top five scorers were seniors last season as the Badgers went 18-13 and lost to eventual national champion Baylor in the second round of the NCAA Tournament. Brad Davison is the only senior from that team who has indicated he plans to play for the Badgers again next season.