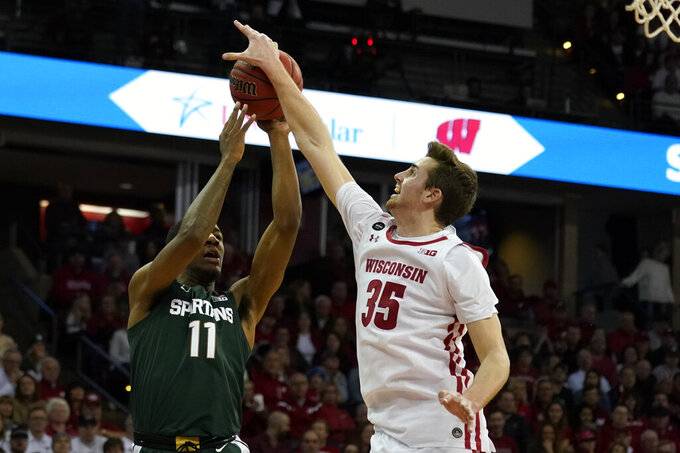 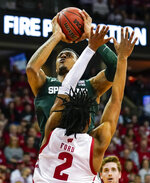 MADISON, Wis. (AP) — Michigan State coach Tom Izzo talked with Wisconsin counterpart Greg Gard earlier in the week about what the Badgers were facing — including the suspension of starter Brad Davison.

So Wisconsin's performance against the 14th-ranked Spartans didn't surprise Izzo.

“I can take a little joy in my profession that kids still rallied around (their coach),” Izzo said.

Nate Reuvers scored 15 points and D’Mitrik Trice had 14 to help Wisconsin edge the Spartans 64-63 on Saturday. The win for Wisconsin snapped an eight-game losing streak in the series against Michigan State.

Aleem Ford, who shot 5 of 6 from the field and made a pair of 3-point baskets, matched a career high with 13 points.

Wisconsin earned the win despite missing both Davison and Kobe King. The team’s second-leading scorer, King announced this week that he intended to transfer.

Trice had six rebounds and five assists for the Badgers, who snapped a two-game losing streak.

“The biggest thing was just playing together and playing for each other, and that’s the kind of the message that Coach Gard always has for us,” said Reuvers, who shot 5 of 9 from the field.

Cassius Winston scored a game-high 23 points and Rocket Watts had 16 for Michigan State (16-6, 8-3), which has lost three of its last four Big Ten road games.

Winston scored the Spartans’ final five points, including a 3-pointer at the buzzer.

The Spartans fought back after a sluggish first half with a 17-2 run.

Winston scored seven points during that second-half stretch. The standout guard’s jumper with 11:22 to go pulled Michigan State within three points at 50-47.

Wisconsin held Michigan State to season lows in free throws made and attempted. The Spartans went just 3 of 4 from the line.

Davison, who had 21 starts this season, did not play due to a suspension for a flagrant foul he committed late in the Badgers’ loss at Iowa.

But Davison was a visible presence. The junior sat on the home bench in street clothes and enthusiastically cheered for the team. He’ll return to the lineup on Wednesday at Minnesota.

Gard, in his fifth season as head coach, mentioned Izzo and former Wisconsin coaches Bo Ryan and Dick Bennett as coaches he trusts in the profession.

Izzo has been at the helm at Michigan State for 25 years.

“I always say you never take criticism from anybody you would never ask advice from — coaches who I really trust in the profession who have been there, done that,” Gard said.

“They’ve gone through the battles. … Those three are near and dear to me.”

Michigan State: Foster Loyer came off the bench and drained back-to-back jumpers to help the Spartans dig out of their first-half hole.

Wisconsin: The Badgers will get a boost when Davison returns from his one-game suspension. In 21 starts, Davison has averaged 8.8 points per game. He shoots 88.6% from the free throw line.

Gard said he was pleased with how the Badgers were able to persevere through the Spartans’ second-half push.

“You have to be able to counter and withstand that,” Gard said. “You can’t go down in the dumps and hang your head, and pout about it. Let’s move on.”

It's been hard for Big Ten teams to stay too high in the rankings this season because of all the parity in the conference. Saturday was another example of that for Michigan State.

Michigan State hosts Penn State on Tuesday night in the first of two regular-season meetings between the teams.