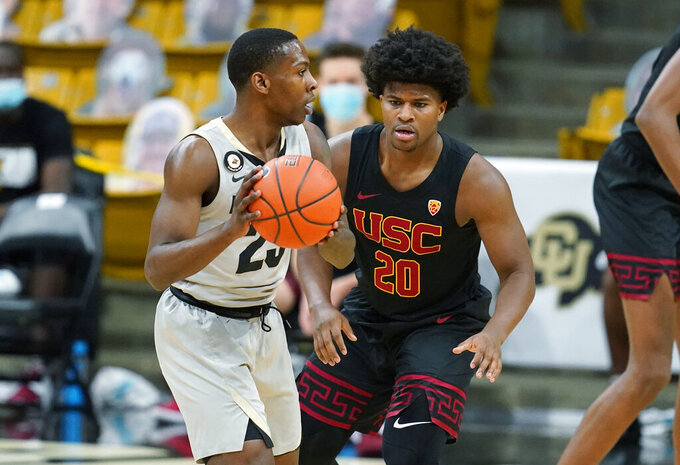 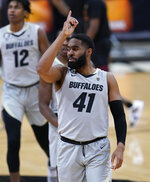 BOULDER, Colo. (AP) — For the first time all season, McKinley Wright IV had his family in the building.

His parents, grandma and grandpa, brother and cousin were all treated to quite a show.

Wright had a career-high 14 assists, Jeriah Horne hit a career-best six 3-pointers on his way to 24 points and Colorado routed No. 19 Southern California 80-62 on Thursday night to sweep the season series.

“It meant the world,” Wright said of having his family on hand as part of the limited fans allowed into the game. “Meant a lot."

The only thing he'd like back is picking up that technical foul in the first half. Although, it actually did give his team a surge of energy, as the Buffaloes went on a run soon after.

“I let my emotions get the best of me,” Wright said. “Their bench, they kept yelling at our players every time we shot that it was off. I said some words I shouldn’t have said.”

Already the school's career leader in assists, Wright and his speed gave the Trojans fits all evening. His 14 assists tied for the second-most in program history. The record is 15 by Jose Winston against Coppin State on Jan. 2, 2001.

“I didn’t even know I had 14 assists,” Wright said. “That’s crazy. Shoutout to my teammates.”

In all, the efficient Buffaloes had 20 assists on 27 baskets.

“When we share the ball and have 20 assists on offense, we’re a joy to watch,” Colorado coach Tad Boyle said.

The loss was a blow to USC, which fell a half-game behind rival UCLA (17-5, 13-3) for first place in the Pac-12 race. The Trojans are chasing their first regular-season conference title since 1984-85, when they shared the crown. Their last outright league championship was in 1960-61.

“Doesn’t matter if we lose by one point or 18 — we deserved what we got tonight,” USC coach Andy Enfield said. “They played better than us.”

“Evan Mobley is going to be a top-five NBA draft pick,” Wright said. “Shoutout to Dallas and Evan for working their tails off.”

Mobley's brother, Isaiah, returned to the court after missing a game with a strained right calf. He had two points.

Behind the shooting of Horne, the Buffaloes opened a 17-point lead midway through the second half before the Trojans made one final run and cut it to 10. The Buffs weathered the storm and Wright helped wrap it up from the free throw line.

“We played at a high level,” said Wright, who received a basketball as part of a pregame ceremony to recognize him after he recently became the first Pac-12 player to eclipse 1,700 points, 600 assists and 600 rebounds in a career. “But there’s always room for improvement.”

USC: Quite simply, Colorado was shooting well and the Trojans not so much. Southern California shot 38% from the floor. “When their shooters are making that high of a percentage, they are pretty tough to beat at home,” Enfield said.

The Buffaloes are challenging single-season Pac-12 and national records with their stellar free throw shooting. After going 14 of 15 from the line Thursday, they’re shooting 83%. The conference record for a season is 78.6% by Arizona in 2003-04 and the NCAA Division I mark is 82.2% by Harvard in 1983-84.

In addition to Wright, Horne and Eli Parquet picked up technical fouls in the second half. Boyle's not reading too much into it.

“If it were an issue with this team and it was something that happened year in and year out, game in and game out, then yes, it would be something we've got to address," Boyle said. “Aberration tonight.”