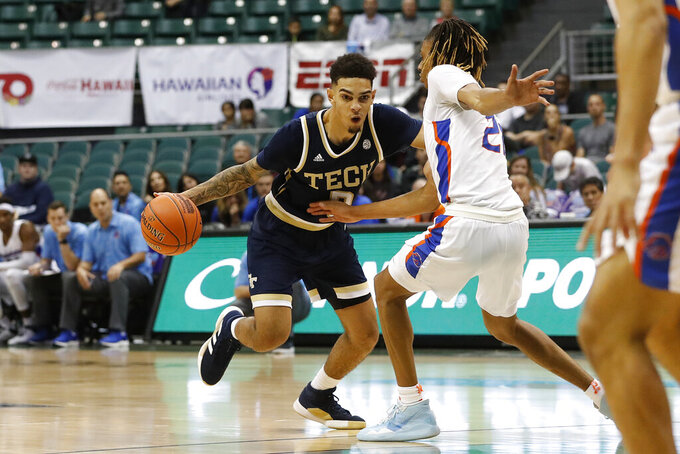 HONOLULU (AP) — Moses Wright and Jordan Usher scored 18 points each and Georgia Tech rallied to a 74-60 win over Boise State on the opening day of the Diamond Head Classic on Sunday.

The Yellow Jackets (5-5) trailed by as many as eight points early in the second half but used a 24-4 run to take a 58-43 lead with eight minutes to play.

It was Alvarado’s first game back since he suffered an ankle injury against Elon on Nov. 11. The junior guard missed seven games while recovering. He had two steals and provided much of the defensive spark in the second half.

Evan Cole’s 3-pointer from the left wing broke a 41-all tie and gave Georgia Tech the lead for good with 12:50 to play.

Georgia Tech’s Jordan Usher played in just his second game since since transferring from Southern California. The 6-foot-7, 220-pound junior missed the first eight games of the season. He made his debut with the Yellow Jackets on Wednesday and scored four points in 18-plus minutes in a 65-47 loss to Ball State. Usher shot 6 of 10 from the field in 31 minutes on Sunday.

“I thought Jordan gave us great minutes in the second half. He was playing under control and he played within himself,” Pastner said. “After Wednesday’s game I was real concerned — I was like ‘who is this guy?’ — because in practice he’s been really, really good. He was the Jordan Usher that we saw today … but I think he found himself a little rhythm.”

Boise State also gained a player this week when it was announced that Oregon-transfer Abu Kigab was cleared after sitting out the spring and recently-completely fall semesters. The 6-foot-6 junior forward shot 4 of 12 from the field, including 2 of 3 on 3-pointers, and added three rebounds in two assists in his Broncos’ debut Sunday.

“He was just making things happen for us and you can see where he is really going to make a big difference for us down the road,” Broncos coach Leon Rice said. “Usually you need that guy (back) before the game you need him, to let him get his jitters out and get comfortable playing because there’s nothing that simulates games like playing games, so you can’t expect everything to be seamless, but I see him really helping and adding more value to the team the longer we have him out there.”

“Well, first of all they’re a very good basketball team and they’re very well coached,” said Pastner, whose team outscored the Broncos 48-29 after halftime. “We really defended well. The reason we won the second half, one was defense and two, we only had five turnovers — I don’t count that last one — after we had two in the first two minutes, so we really took care of the ball.”

The Yellow Jackets had 14 turnovers in the first half, but just six after the break.

Georgia Tech: Will play Houston in Monday’s tournament semifinals. The Yellow Jackets are 3-0 all-time against the Cougars, who beat Portland 81-56 in a quarterfinal Sunday.

Boise State: Faces Portland in a consolation game Monday. The Broncos own a 9-7 advantage all-time over the Pilots. Their last meeting on Dec. 3, 2017 resulted in a 77-54 home win for Boise State.