The Wright way: Do-it-all guard has Buffs ranked, on track 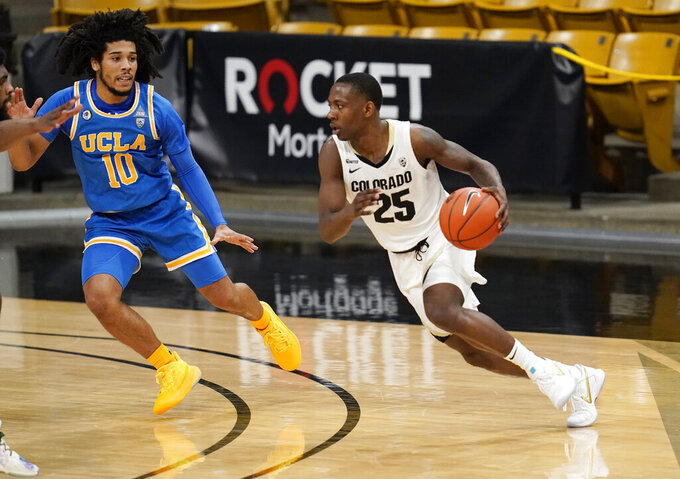 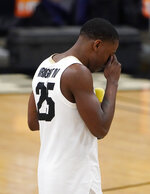 BOULDER, Colo. (AP) — McKinley Wright IV often chats with himself in the heat of a close game.

Just a quick on-court pep talk: “Come on, 25, pick it up,” the do-it-all point guard for No. 24 Colorado will say, referring to himself by his uniform number. “Go-time, Two-Five.”

His time in Boulder is drawing to a close as the school’s all-time assists leader takes the court in his final home game Thursday against Arizona State.

It will be an emotional moment for him. But the emotions are nothing that can't be calmed through a quick chat with himself. That always does the trick.

“I just want people to say that every game he played his heart out," the 6-foot senior from North Robbinsdale, Minnesota, said. “That he did whatever it takes to help this team win ball games and keep this program going in the right direction."

Talk about life ending up imitating his art: He had an early brush with one of Colorado's most famed basketball players but didn't know it at the time.

Wright was assigned a project in grade school where he designed a poster of four basketball players he most admired. The late Kobe Bryant was pictured on there. So were Michael Jordan and Steve Nash.

The fourth member of his poster was longtime NBA standout Chauncey Billups, who transformed Colorado into an NCAA Tournament team during his two seasons in Boulder.

“I didn't even know he played for Colorado,” Wright said. “I just knew him from the Pistons and Nuggets.”

Over the years, he's become tight with Billups, who's known as “Mr. Big Shot." No surprise that when Wright recently became the first men's Pac-12 player to eclipse 1,700 points, 600 rebounds and 600 assists for a career, Billups was among the first to text him.

“It’s just crazy to be able to work out with Mr. Big Shot and be able to talk to him and have his phone number,” Wright said. “It’s like a big-brother mentor for me."

The respect is mutual.

“He plays the right way,” Billups said in an interview several months ago. “He’s tough. He’s gritty. He’s a leader.”

To think, Wright nearly left after his junior season as he tested the NBA draft process before returning for final year.

He’s driven the Buffaloes to a 19-7 mark (13-6 Pac-12) and back into the rankings. They appear in line for an NCAA Tournament berth — perhaps even the sort of team that could make a deep run.

“We do have the group for that,” said Wright, whose parents have been among the limited number of fans allowed into the arena the past two home games.

Wright's always finding ways to get everyone involved. The best illustration of that may have been last week against a then-ranked Southern California squad. Wright set a career-high with 14 assists — one away from the school record — and also added 15 points.

“He only had four rebounds so I might have to bench him,” coach Tad Boyle cracked.

Boyle and Wright have been close since the coach first met with Wright, who was set to go to Dayton out of high school before a coaching change altered those plans. As part of Colorado's recruiting pitch, Wright said Boyle wrote out a potential lineup with Wright's name on it.

One caveat: The spot had to be earned.

Wright did, too, putting together one of the best first-year campaigns in Colorado history. He even broke the assists record by a freshman for a season, which had belonged to Billups.

Since then, Wright has taken his game to another level. He just earned Pac-12 player of the week honors for a sixth time in his career.

“I wouldn’t trade him for anybody,” Boyle recently said. “He’s a special player.”

Technically, Wright could return next season after the NCAA granted an additional year of eligibility to winter athletes. But he won’t.

“I feel like I’m ready for the next level,” Wright said.

Wright became the school’s all-time assists leader on Jan. 14 in a win over California. The previous mark of 562 was held by Jay Humphries, who played for the Buffaloes from 1980-84 and reached out to congratulate Wright.

“I'm proud of that assist record,” said Wright, who currently has 651 career assists. "Me being able to get other guys shots and make plays for others, that brings joy to me.”

This brings joy, too — a good-luck text from his mom before each game. She always includes a plethora of “star” emojis.