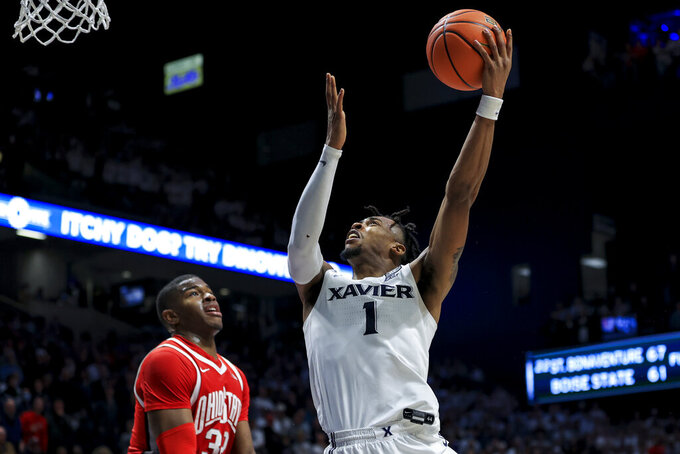 Xavier's Paul Scruggs (1) drives to the basket during the second half of an NCAA college basketball game against Ohio State, Thursday, Nov. 18, 2021, in Cincinnati. (AP Photo/Aaron Doster) 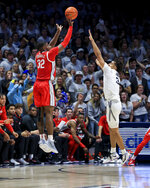 Jamari Wheeler hit a 3-pointer to get Ohio State within two points with 17 seconds left, the closest the Buckeyes had been all evening.

A pair of free throws by Scruggs pushed the Xavier lead back to four. Scruggs then stole Ohio State's inbounds pass and sank two more free throws to ice the game for the Musketeers (3-0).

Nate Johnson had 12 points and Adam Kunkel added 10 for Xavier.

E.J. Liddell had a season-low 17 points for the Buckeyes (3-1), who had dropped two spots in the AP Top 25 after two closer-than-expected games to start the season. Meechie Johnson Jr. had 14 points and Kyle Young scored 12.

“We have to play with more force on both ends,” Buckeyes coach Chris Holtmann said. “Honestly, it was the glass tonight. It the was the glass, and our inability in the first half to get the kind of quality shot we need to.”

The Musketeers led by nine at the half. They were up by as much as 11 points in the second half, but the Buckeyes began chipping away in the final five minutes and looked as if they might pull it out when Wheeler hit the big 3.

Ohio State: This was the worst shooting game for the Buckeyes thus far. They got off to a slow start, shooting 33% in the first half, and couldn't catch up.

“It doesn’t feel good right now. It feels terrible,” Holtmann said. “But I’m glad we were a part of it. I’m glad our young guys got to experience this environment because, hopefully, it will prepare us more for what our league is.”

Xavier: The Musketeers have played teams close in winning their first three games. They prevailed by three points in the season opener against Niagara and erased a second-half deficit to beat Kent State the last time out.

“It was definitely awesome out there," Nunge said. "We knew the kind of fight we had coming in with Ohio State. They’re a ranked team, they’re the big state school. We knew we wanted to come out and show them what Xavier basketball is all about.”

Xavier improved to 2-3 against Ohio State. It was the first meeting between the schools since the Buckeyes' 78-71 overtime win in the second round of the 2007 NCAA Tournament.

“It means a lot,” Scruggs said. “This win was for us, but it’s also for the alumni. We won this game for them.”

Liddell had a career-high eight blocked shots, the most in a game by an Ohio State player since Dallas Lansdale had eight in 2010.

The Buckeyes likely will drop again. Xavier, on the strength of this win, could get enough extra votes to sneak into the poll.