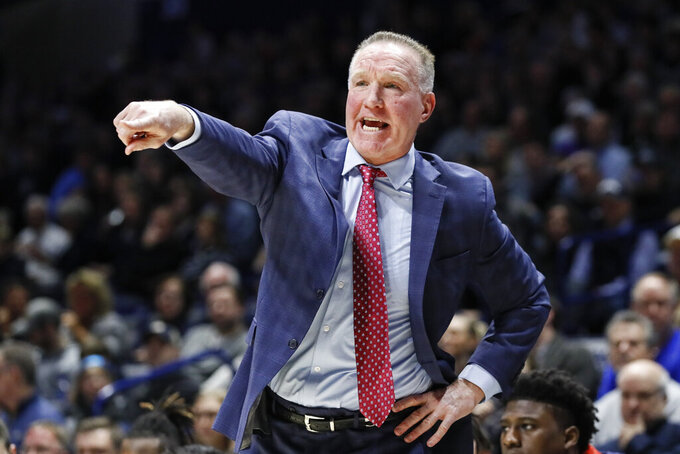 St. John's head coach Chris Mullin directs his players from the bench in the first half of an NCAA college basketball game against Xavier, Saturday, March 9, 2019, in Cincinnati. (AP Photo/John Minchillo) 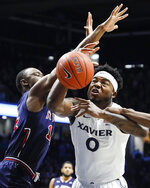 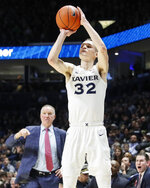 CINCINNATI (AP) — Stranded in the Big East basement last month after six losses in a row, defending champion Xavier is finishing with a flourish.

"We've got to end with a bang," Scruggs said.

That's what they're doing.

Xavier (17-14, 9-9) has won six of seven for momentum heading into the Big East Tournament. The Musketeers pulled off their latest win without top scorer Naji Marshall, who has averaged nearly 21 points during the surge. Marshall twisted his left ankle during a loss at Butler on Wednesday.

Welage added 19 points, including back-to-back 3s that put Xavier up 72-61 with 2:47 to go, the Musketeers' biggest lead to that point.

"Some people counted us out and things of that nature," Welage said. "We just stuck together. We were able to withstand the losing streak and now we're hot at the right time. We're all playing well and we feel good about the future."

By contrast, St. John's (20-11, 8-10) finished the regular season in a deep fade, clouding its NCAA Tournament prospects. The Red Storm has lost a season-high three in a row and four of its last five, and couldn't take advantage of a Xavier team missing its best player.

Marshall had a career-high 31 points during an 84-73 win at St. John's on Feb. 28. Coach Travis Steele said Marshall could return for the Big East Tournament, where Xavier gets a first-round bye.

"I anticipate him playing, but at the same time I don't want to say 100 percent," Steele said.

Shamorie Ponds led the Red Storm with 19 points and 10 assists. The Red Storm has struggled with its perimeter defense during the fade, a focus heading into the tournament.

"Most of it is activity on the perimeter — ball pressure, just being pesty," coach Chris Mullin said. "We've got somewhat of a small team. We're chasing them. They should be chasing us."

Welage had 13 points — his first double-digit game since the league opener in December — as Xavier stayed ahead for most of the first half and took a 38-33 lead into the break .

Welage's 3-pointer from the left corner gave Xavier a 69-59 advantage — matching its biggest of the game to that point — with 3:39 left. He hit another as the Musketeers pulled away.

St. John's: The Red Storm wasted a chance to clinch third place, which would have been its best finish in the Big East since 2000. Its NCAA Tournament resume includes a 3-1 record against Villanova and Marquette, but the Red Storm could use a solid showing in the conference tournament next week.

"We've got to get back to the team we were," Mullin said. "Just being active, playing fundamental, good defense on the ball, forcing turnovers. I think on offense we can be much sharper."

Xavier: The Musketeers are on the upswing as they conclude a challenging transition season in Steele's first season as head coach. They lost four starters from the team that won Xavier's first Big East's regular season title a year ago.

"It's go time," Steele said. "This is the time when Xavier's always made its mark, and there's a lot to play for."

The Musketeers honored their three graduate students — Welage, Zach Hankins and Kyle Castlin — before the game. All three transferred to help depleted Xavier get through the season.

Both teams await results of later Big East games to learn their opponents next week at Madison Square Garden.