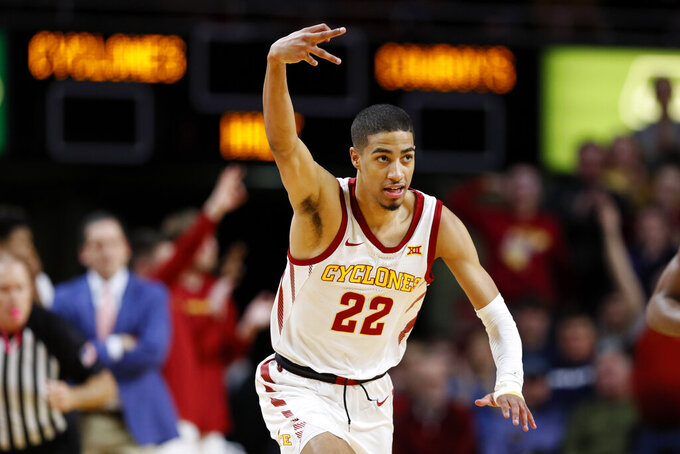 The 6-foot-8 forward added a much-needed crescendo to his game Tuesday night against Oklahoma State, scoring a career-high 27 points in an 89-82 win.

And Young did it coming off the bench for the fourth consecutive game in his typical grit-based manner.

“I think I was just being really aggressive,” said Young, whose previous career-high of 18 points was on Feb. 15, 2017 against Kansas State. “I figured I’d just go out as hard as I can.”

“I quite honestly thought the difference in the game, the key to the game was Solomon Young,” Cowboys coach Mike Boynton said. “He gave us a different look that we obviously didn't have an answer for most of the night.

The Cyclones made 11 of 24 from beyond the 3-point arc and led 75-60 with five minutes left. The Cowboys pulled within five points, 83-78, with 46 seconds left but Iowa State made 5 of 6 from the foul line to secure the win.

“We didn't close the game the way we needed to,” Iowa State coach Steve Prohm said. “I thought we took the game for granted the last minute and a half. Everybody in our league is fighting for as many wins as you can get and every one's so important, so you've got to play to the very end.”

Iowa State guard Rasir Bolton scored 21 points and also grabbed a career-high nine rebounds. Young shot 13 of 15 from the free throw line, where the Cyclones doubles up the Cowboys with 28 makes to 14.

“That's probably his best game he's had since he's been here,” Cyclones coach Prohm said of Young. “He was active, he was athletic, he guarded out of his area. He was terrific. That was big for us.”

Oklahoma State: The Cowboys committed a season-low eight turnovers, but were outrebounded 39-30 and allowed Iowa State to shoot 51% from the field. Oklahoma State’s struggles at Hilton Coliseum continued as it dropped its eighth consecutive game there. Four of those setbacks have come by four points or fewer.

Iowa State: The Cyclones avoided joining the Cowboys in the Big 12 basement by winning their second straight home game. Iowa State needed a boost after double-digit road losses at No. 1 Baylor and No. 18 Texas Tech. The Cyclones made just 3 of 22 from 3-point range in the loss to the Red Raiders, but drilled 46% of their 3s on Tuesday.

“I think it gives the guys a confidence boost knowing that we can shoot the 3 decently at times. I think we've been too worried about yesterday and tomorrow and not where at in the moment.” — Iowa State’s Tyrese Haliburton on his team’s 11 of 24 performance from 3-point range.

Iowa State: Plays at No. 16 Auburn on Saturday.