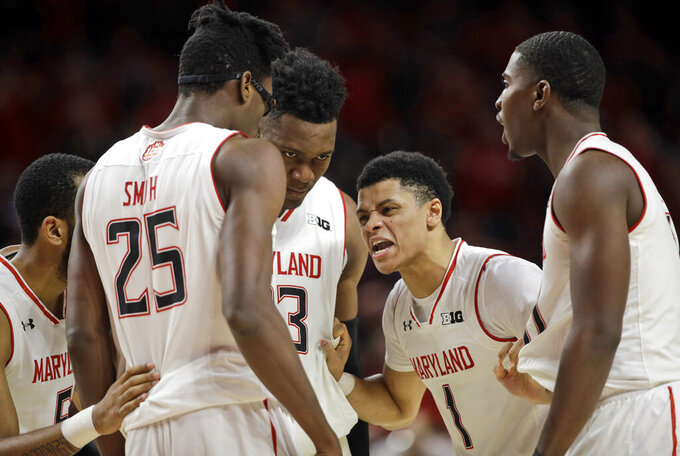 A confidence-building victory at home over No. 12 Purdue earlier this week provided the 24th-ranked Terrapins (19-6, 10-4) with some momentum heading into Saturday's game at No. 6 Michigan.

"We are getting better. That's all I can ask," coach Mark Turgeon said. "There's six games left, and we're going to see what we can do."

Avenging a loss in December at Purdue, the Terrapins showed how much they've improved Tuesday by outscoring the Boilermakers 40-18 in the second half of a 70-56 victory.

Freshmen Jalen Smith, Eric Ayala and Aaron Wiggins combined to score 21 consecutive points to bring Maryland from a 40-36 deficit to a 57-52 lead. And, just as impressive, the kids shut down Purdue on the other end of the court.

"The thing that's amazed me about Maryland is young guys are not normally very good defenders. It takes them a while," Painter said. "These guys can guard. Smith can guard. Smith helped his team win. That's the value of understanding and growing as a player. 'Turg' has done a great job with those guys."

Turgeon stressed in October that this team would improve with experience, and he's helped them along with a patient, positive approach.

Alaya, a 6-foot-5 guard who's shooting 47 percent from beyond the arc, said, "I just want to commend coach Turgeon; he has a tremendous amount of confidence in us. The ups and downs can get to you as a freshman, but he is always uplifting and making sure that we are OK."

As part of the preparation for Purdue, Turgeon watched video of the first game between the teams, one in which the Terrapins committed 17 turnovers and got only 21 points from their freshmen in a 62-60 defeat.

"It made my stomach hurt because, man, we were young and we just played hard," he said. "We had no business (being) in that game. We've come a long way."

"Give those guys credit. They have a bunch of 19-year-olds running around out there making shots, making plays," he said. "That's pretty cool because you get to see guys grow."

Although the freshmen are important, the Terrapins are in fourth place in the Big Ten (and in position for a double bye in the conference tournament) because 6-10 sophomore forward Bruno Fernando has been a force on both ends — he's got seven straight double-doubles — and junior guard Anthony Cowan leads the team in scoring and assists.

They'll be called upon for more of the same against first-place Michigan (22-3, 11-3). The Wolverines are 15-0 at home, and Maryland is 4-3 on the road in the Big Ten (not counting a humbling loss to Illinois, which had lost seven of eight, at Madison Square Garden).

Then Maryland travels to Penn State before concluding the regular season at home against Michigan and Minnesota.

"I know if we win, good things are going to happen," Ayala said. "So if we get a bye or whatever, that'd be a blessing. But we've got to go out and play hard every game no matter who's in front of us."