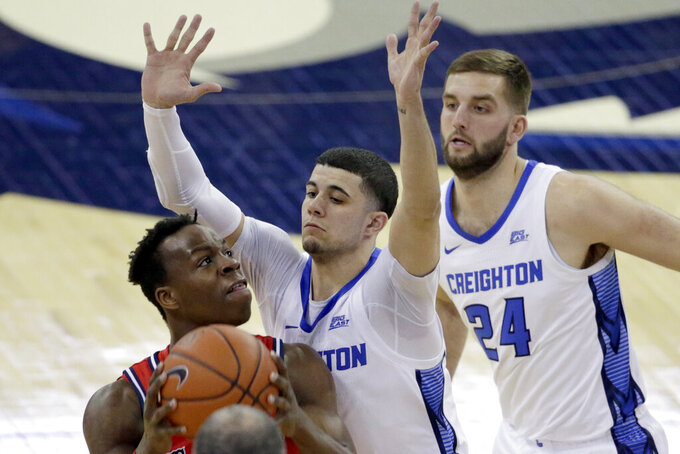 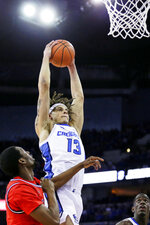 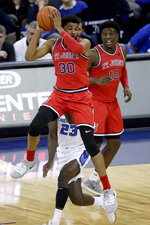 OMAHA, Neb. (AP) — Marcus Zegarowski and Denzel Mahoney atoned for dud performances three nights earlier with outings that ranked among their best of the season.

The Bluejays bounced back from a 73-56 loss at Providence, a game in which Zegarowski was 1 for 10 for a season-low three points and Mahoney was 0 for 5 and held scoreless for the first time since he became eligible in December.

“It's just a part of college basketball,” Mahoney said. “One game you might have a bad game. You have the next one to make up for it. I think that's what we did tonight.”

Creighton (18-6, 7-4 Big East) shot a season-best 60% from the field and matched its season high with 13 3-pointers but couldn't separate from the Red Storm until the middle of the second half. That's when Zegarowski scored on a drive and 3 on back-to-back possessions as the lead grew to as many as 17 points.

“I always try to play confident and always play for my teammates and coaching staff," Zegarowski said. "They put me in position to be successful. Just a great win tonight.”

Ty-Shon Alexander and Damien Jefferson added 16 points apiece for the Bluejays, and Christian Bishop and Mitch Ballock finished with 10 apiece.

“He's a guy who works on it, and he probably would love to shoot more every game," Red Storm coach Mike Anderson said. "At the same time, he was the spark we had on this basketball team. If you watch our team most of the year, you get more guys who are playing with much more confidence. I just want to see us put it altogether for one night.”

St. John's and Creighton have two of the quickest-tempo teams in the Big East, and it showed during a fast-action first half. Bishop hit a jumper and threw down a huge lob dunk off a feed from Zegarowski to send Creighton into the second half with a 47-37 lead.

“We like any team that wants to run with us,” Zegarowski said. We feel we have the advantage there. Down the stretch they got a little tired and we kept pushing, and that's just testament to our system and how we play."

The Red Storm got 3s from unlikely sources to cut into the deficit. Earlington made two in a row to start the second half and Nick Rutherford, 4 of 25 coming in, hit one to get the Red Storm within 58-54.

“I thought our guys fought,” Anderson said. “Just didn't have enough in the tank when it was all said and done.”

Creighton committed only eight turnovers against a St. John’s team that had forced 13 turnovers or more in each of its previous 23 games.

“Eight turnovers against St. John's, that's how you win,” Creighton coach Greg McDermott said. “They're really hard to play against and they don't quit, and I think you saw that in their team today. When we share the basketball and we get out in transition, good things happen.”

St. John's: The Red Storm were in the game until the final 10 minutes because they controlled the boards, holding an 18-4 advantage in offensive rebounds, and hit timely 3-pointers. But the defense couldn't slow down the Bluejays.

Creighton: The Bluejays couldn't afford a home loss to the ninth-place team in the Big East after losing by 17 at Providence on Wednesday. They improved to 13-1 at CHI Health Center.

Ballock tied his career high with eight assists, and he made a 3-pointer for a 23rd straight game and passed Rodney Buford for fifth on the school's career chart with 214.

A solid win over St. John's following the loss to Providence probably won't be enough to keep Creighton in the Top 25.

Creighton visits No. 12 Seton Hall on Wednesday in the first of two games between the teams the next three weeks.