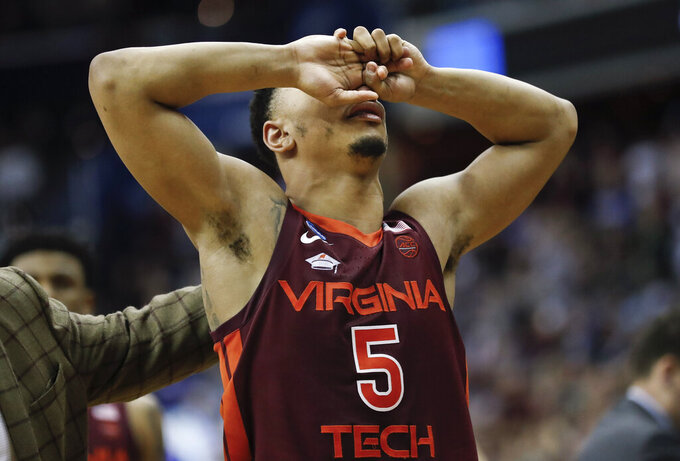 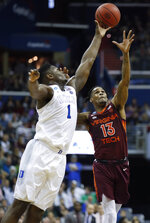 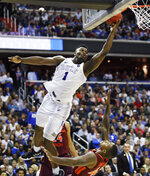 WASHINGTON (AP) — There was nothing Zion Williamson could do but watch. Once again, Williamson and Duke were at the mercy of an opponent's last-second shot at the rim. Once again, the Blue Devils and their phenomenal freshmen marched on in March Madness when the ball didn't drop through.

Williamson and No. 1 overall seed Duke moved into the Elite Eight by erasing a deficit and then holding on to edge No. 4-seeded Virginia Tech 75-73 on Friday night.

Narrow as could be.

The Hokies had their chances in the closing seconds, the final one coming on an inbounds play with 1.1 seconds left. The ball went to Ahmed Hill as he jumped to the basket, but his attempt to tie it somehow fell short from close-as-can-be.

Hill dropped to the court on his back.

It was similar to the way two last-gasp shots went off the rim for Duke's second-round opponent, UCF.

And so now Duke will take on No. 2 seed Michigan State on Sunday with a Final Four berth on the line.

That Coach K and his crew are moving on is thanks in part, of course, to Hill's late flub, of which Virginia Tech's Kerry Blackshear Jr. said: "Ahmed is the guy that we definitely want taking that shot. You wouldn't want it any other way."

Duke also got by because a pair of 3s by Virginia Tech went awry just before that final miss, one by Hill and the other by Ty Outlaw.

But give plenty of credit to Williamson, and his fellow first-year stars RJ Barrett and Tre Jones. Williamson scored 23 points, Barrett had 18 and a career-high 11 assists, and Jones added 22 points and eight assists.

Barrett made only one shot in the first half, which ended with Virginia Tech up 38-34. But he made five of his first six shots after the break.

Williamson showed off his full repertoire, all of the sorts of skills that made people joke — well, actually, they might be dead serious — that NBA teams would be #NotTryinForZion, tanking away this season in order to get a better chance at taking him with the No. 1 overall pick in the draft.

At 6-foot-7 and 285 pounds but with the agility, speed and flair of a guard, Williamson scored seven of Duke's first nine points, including one rise-above-it-all put-back jam and, later, a 3-pointer. He flew from seemingly nowhere to swat a shot off the glass at the defensive end. He tapped in a no-look layup.

And then, when Duke used a 9-0 run to erase its last deficit and make it 60-52 with 10 minutes left, Williamson was a part of it, naturally. There was a dart of a pass out of a double team in the paint to find Jones in a corner for a 3. And then the coup de grace — a soaring, rim-rattling, two-handed alley-oop dunk off a lob from Jones.

"I'm jumping not knowing where the rim is," Williamson said. "A great moment."

Perhaps buoyed by the knowledge that it beat Duke already this season, at home in February — albeit while Williamson was sidelined for five games after hurting his knee in a bizarre, headline-grabbing shoe mishap during a game — Virginia Tech came out looking like a team that believed.

Believed it could withstand a big game from Williamson.

Believed it could hang with the highly regarded Blue Devils.

Believed it could win.

This time, the Blue Devils were without another terrific freshman, forward Cam Reddish, who was sidelined with a bad knee and was a late scratch.

Blackshear led the Hokies with 18 points and 16 rebounds. Hill scored 15.

Reddish had started each of Duke's 35 games entering Thursday. Part of a tremendous recruiting class, he ranks third on the team with a 13.6-point scoring average. "We didn't find out until right before the game," Krzyzweski said.

Outlaw started and finished with five points. He was arrested and charged with possession of marijuana based on something that happened at his home in Virginia while he was with the Hokies for their opening NCAA games in California. Coach Buzz Williams said Outlaw passed a drug test administered by an outside agency.

Duke is 12-2 against Michigan State overall, 4-1 in the NCAAs. Michigan State beat No. 3 seed LSU 80-63 to reach the Elite Eight for the 10th time under coach Tom Izzo.