Zion, No. 1 Duke miss out on Final Four in loss to Spartans 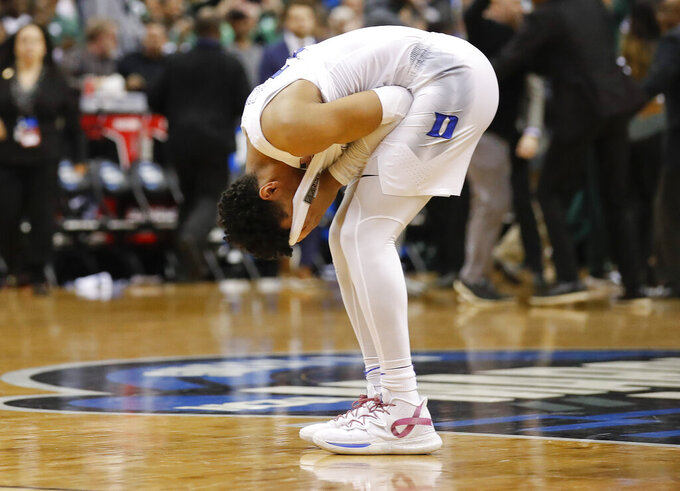 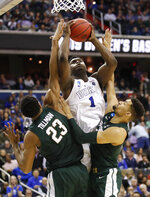 WASHINGTON (AP) — Twenty minutes after his first and, in all likelihood, last season at Duke ended with an Elite Eight exit, Zion Williamson trudged through an arena hallway, his head down.

Following closely behind was teammate RJ Barrett, another fabulous freshman for the NCAA Tournament's No. 1 overall seed. Two other members of their class were sitting in Duke's locker room after a 68-67 loss to Michigan State in the East Region final Sunday: Tre Jones covered his face with a white towel and sobbed; Cam Reddish put his right hand on the nape of Jones' neck to console him.

"Our bond is very deep. I don't think nobody will ever understand it, because all season long, we were under the microscope," said Williamson, who had game-highs of 24 points and 14 rebounds. "People said we wouldn't do this, we wouldn't do that. And I think we exceeded all their expectations. I'm very proud of my brothers."

Actually, he was a player so dynamic, and Duke was a team so talented, that plenty of folks thought they were capable of anything — including a national championship.

After squeaking by in their previous two games by a combined total of three points when their opponents missed last-second chances from close range, Williamson and the Blue Devils could not quite come through this time.

They didn't exactly lose to a nobody, of course: Led by Big Ten Player of the Year Cassius Winston, No. 2 seed Michigan State is headed to its eighth Final Four under coach Tom Izzo. Still, the Blue Devils were a 2-1 title favorite after Selection Sunday and a pick in more than a third of ESPN's brackets.

"We obviously had some pretty big-name guys and they had a lot of hype around them and things like that," Jones said. "No one was jealous or insecure. Everyone just accepted it and had as much fun with it as we could."

Now the question becomes how many of the key freshmen — that quartet accounted for all but eight of Duke's points on Sunday — will return.

"They're deserving of special things," coach Mike Krzyzewski said. "Not going to the Final Four is a huge disappointment for us."

Williamson is expected to go pro and be the No. 1 overall pick in the NBA draft.

Asked whether he was done in college, he replied: "I mean, obviously, it's a high possibility, but I'm not really focused on that right now."

Barrett is considered a top-three talent, too, and while he had 21 points, six rebounds and six assists against Michigan State, he also ended up with seven turnovers and missed one of two free throws with a chance to tie the game.

After his first foul shot was off, Barrett wanted to miss the second, because Duke was down by two with 5.2 seconds and hadn't fouled enough yet to set up a 1-and-1 for the Spartans. But it bounced high off the rim and slipped through the net.

"It's funny that it went in," Barrett said, his voice a monotone.

Funny how the Big Dance is coming to a close, too. After 14 of the top 16 seeds made it through the opening weekend — including all the No. 1s — the more surprising results arrived now, one after another.

Duke, North Carolina and Gonzaga all are gone.

So is the most talked-about player in all of college basketball, a 6-foot-7, 285-pound combination of size, strength and speed, known to many by just one name: Zion.

"For us to come this far, I'm proud of everybody," Williamson said Sunday night. "It's been an incredible ride."